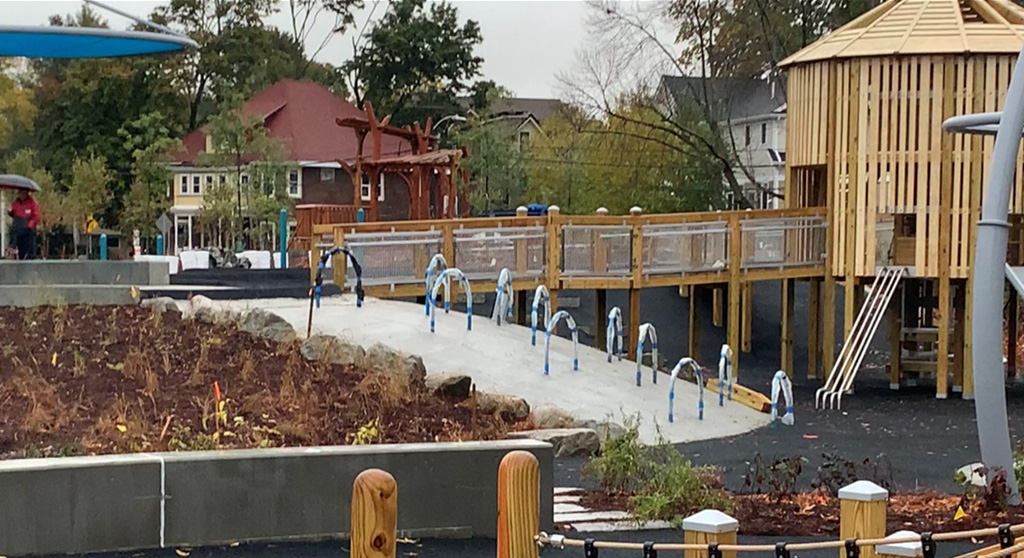 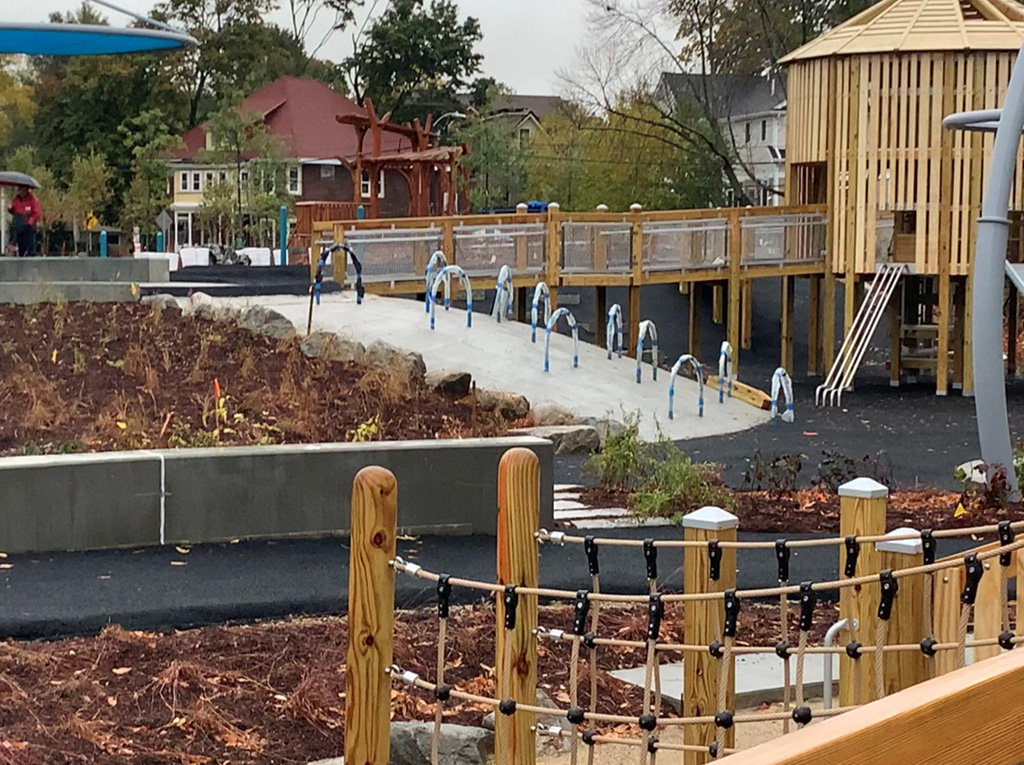 A “universal design” playground gets some City Council discussion Monday and an opening ceremony at 11 a.m. Saturday at Danehy Park. (Photo: City of Cambridge)

City Council, 5:30 p.m. Monday. Councillors may try to get ahead of plans by Denver-based Healthpeak to create a massive 36-acre life-science campus in the Alewife Quadrangle – by imposing a moratorium on new office and lab space until zoning can be instituted that looks at planning studies from 1979 and 2019. So far, that follows a classic Cambridge pattern: expensive and comprehensive work by planners and residents without results that are recognizable to the people who put in the time. Considering how stealthily Healthpeak cobbled together its acreage, councillors are likely to want to apply the brakes.

The agenda includes a call to address concerns about on-street parking prohibitions dictated by the fire department as part of a street redesign project adding separated bike lanes and designated bus lanes on Massachusetts Avenue between Dudley Street and Alewife Brook Parkway in North Cambridge. (Though accessible parking spots have recently been added to plans, and this policy order says it’s not trying to put the brakes on.) And councillors may talk about efforts around a city campaign finance law that would limit donations from people trying to do certain kinds of business with the city and a related home rule petition drafted for submission to the state Legislature.

With a universal design playground opening at 11 a.m. Saturday at Danehy Park – delayed after initial hopes it would open in the summer of 2020 – there are motions asking City Manager Louis A. DePasquale to name the facility after himself and make it a model for any city playground being renovated or designed, so those too can be enjoyed by people with special needs.

City staff have prepared amendments for the city’s Building Energy Use Disclosure Ordinance that councillors recently called out as being a year late. And three residents have submitted sharp comments about a Department of Human Services report on troubles providing parents with Community Schools programs, problems they call “a vivid example of why regular people lose confidence in public institutions and public services.”

Report from the superintendent

Planning Board, 6:30 p.m. Tuesday. The board will conduct an advisory design review of the Jefferson Park Federal affordable-housing project in North Cambridge, scheduled for groundbreaking next year, and consider an extension request for the 29-unit micro-studio apartment building proposed to go in above 544 Massachusetts Ave., Central Square. It will also consider formally commenting on two zoning variance applications submitted to the Board of Zoning Appeal. Televised and watchable by Zoom video conferencing. Televised and watchable by Zoom video conferencing.

Housing Committee, 2 to 4 p.m. Wednesday. This committee run by city councillors E. Denise Simmons and Jivan Sobrinho-Wheeler will discuss a September policy order that could significantly raise “linkage” fees for commercial developments, which goes into building affordable housing for people who will be displaced by such development. The committee meets at City Hall, 795 Massachusetts Ave., Central Square. Televised and watchable by Zoom video conferencing.

Historical Commission, 6 p.m. Wednesday. There are lots of demolition and landmarking issues to look at, including a proposed landmarking study focused on Lesley University’s soon-to-be-for-sale Charles Saunders House at 1627 Massachusetts Ave., between Harvard and Porter squares, built in 1862 as the home of a Cambridge mayor of the era; and a citizens landmarking petition that might get in the way of partial demolition (and a bit of relocation) at the former American Friends Service Committee office building at 2161 Massachusetts Ave., North Cambridge, which was sold in July for $2.9 million. Also, the citizen scientists known as the American Association of Variable Star Observers want to demolish the house, offices and warehouse buildings at 47-53 Bay State Road, Neighborhood 9 near Fresh Pond; and the Buckingham, Brown & Nichols School wants to tear down all or parts of its Kelsey House, Morrison House and Markham Building at 4 and 6 Buckingham Place and 10 Buckingham St., West Cambridge, all part of a revision for its lower school. The since-renovated buildings date back to 1894, 1884 and 1892, respectively. Watchable by Zoom video conferencing.

“Our Cambridge Street” pop-up events, 4 to 5:30 p.m. Friday and 11 a.m. to 1 p.m. Saturday. These events will gather public input for a study known as Our Cambridge Street: A Community Plan, which will look at remaking 1.3 miles of Cambridge Street between Inman Square and Lechmere Station, affecting East Cambridge and the Wellington-Harrington neighborhood as well as Inman. If the prospect of long construction resulting in stuff you don’t want isn’t enough of a draw, cookies are promised. The Friday event is outside the Valente branch library, 826 Cambridge St., Wellington-Harrington; the Saturday event is in the parking lot of the East Cambridge Savings Bank, 1310 Cambridge St., Inman Square, with a rain date the following day at the same time and location.