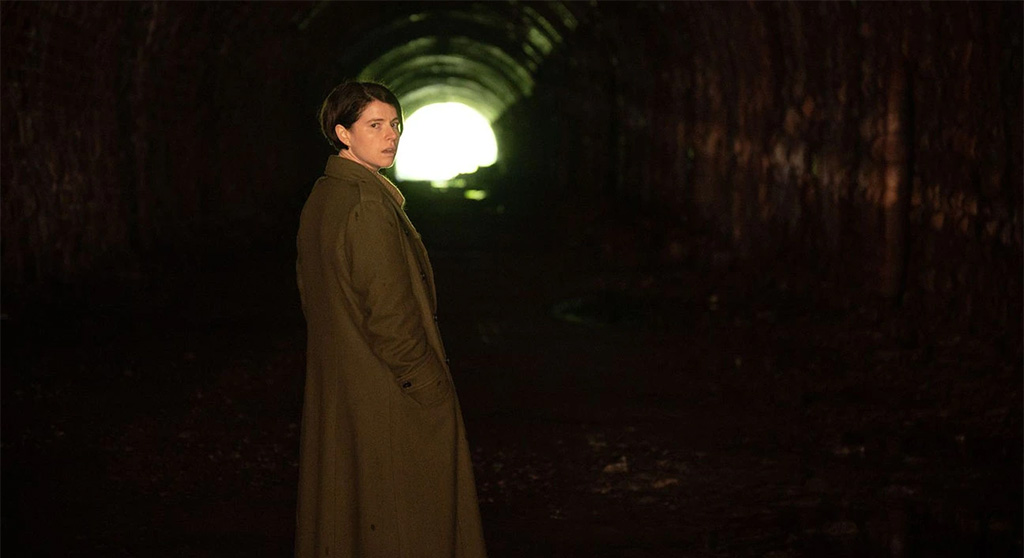 Alex Garland, the scribe behind “The Beach” (2000) and “Never Let Me Go” (2010) and director of “Ex Machina” (2014) and “Annihilation” (2018), continues to raise the bar on immersive psychological horror with this third helming – which, as the title might suggest, is about the male of the species behaving badly. It’s not so much a #MeToo rallying cry but a confessional of a long ingrained inequity, to put it mildly. The film begins with a poignant crack to the jaw as a young Londoner (Jessie Buckley), whose name we learn is Harper, stares out a window. It’s a beautiful view of the Thames and all things London until a man on the other side of the pane drifts slowly into frame. Their eyes lock for a knowing moment, and then he’s gone. You sit there in a prolonged “Wait, what the …” and the camera flips to Harper. Before her face can register as aghast, we notice she has a bloodied nose and a puffy eye.

The man in the window is Harper’s troubled – troublesome might be the better word – husband, James (Paapa Essiedu). In the aftermath of his death, Harper decides to decamp and decompress by renting a 500-year-old countryside estate for a long weekend. The Airbnb tour is given by the owner, an affable chap named Geoffrey (Rory Kinnear) who looks like Hugh Grant gone to pot with bad hair and buck teeth (the prosthetics work in the film is a minor wonderment); anyone want to pack their bags for this remote, verdant tranquillity, though Geoffrey’s late comments to Harper about not putting hygiene products down the loo and some nonsense about “forbidden fruit” are cause for a brow raise. Things are a tick off, and start to go off the rails when Harper, walking old train tracks now grown over and lushly green, yodels playfully into a moss-lined tunnel. It’s a freeing, symphonic cavort until a menacing figure appears at the other end and begins growling and hooting. Later a naked man (also Kinnear) wanders into the garden as Harper is FaceTiming with a bestie. She calls the police, who arrest the intruder (the female officer is compassionate, her male counterpart not so much, and dismissively tags the perp as harmless and wayward). Men, it seems, are initially welcoming and open to Harper, including a priest and a peevish little puck both also played by Kinnear, but ultimately rebuke her with condescending impunity for, essentially, being a woman. The film begins with a series of such macho microaggressions, but gets physical and wildly surreal down the line. To say more would be to dispel the perfectly orchestrated atmospheric dread and well-laid psychological horror that Garland and crew conjure up.

Thematically, there’s a lot to “Men”: the intersection of paganism and Christianity, religious sexual repression and, of course, the headlining gender oppression. But for all its grand motifs and moodiness, the characters and the film itself are fundamentally thin. Don’t get me wrong, “Men” is an all-consuming cinematic experience, and Buckley, so good in “I’m Thinking of Ending Things” (2020) and “The Lost Daughter” (2021), and Kinnear of TV’s “Penny Dreadful,” put on a thespian clinic. But Harper, when boiled down, is little more than a grieving woman who likely escaped an emotionally abusive relationship. One might even argue she’s in a better place. Part of our understanding of that gets filled in by meted flashbacks, where James is less and less the kind, compassionate gent you first got to know, and you wonder too much about how the two ever came together; the trauma manifests in the present with the cast of quirky lads lurking around the bucolic countryside. If you were a fan of Garland pushing the boundaries of reality in “Annihilation” (I was), he goes even further here while dipping his toe into folk horror and adding a few Cronenberg-worthy touches, such as a severed limb and male birthing. More direct and emotionally genuine jabs at institutionalized sexism would be Neil LaBute’s “In the Company of Men” (1997) and Kitty Green’s fictional take on all things Harvey Weinstein, “The Assistant” (2020). “Men” adds to that conversation, but not much that’s new. It’s how it adds that makes it a must-see curio.