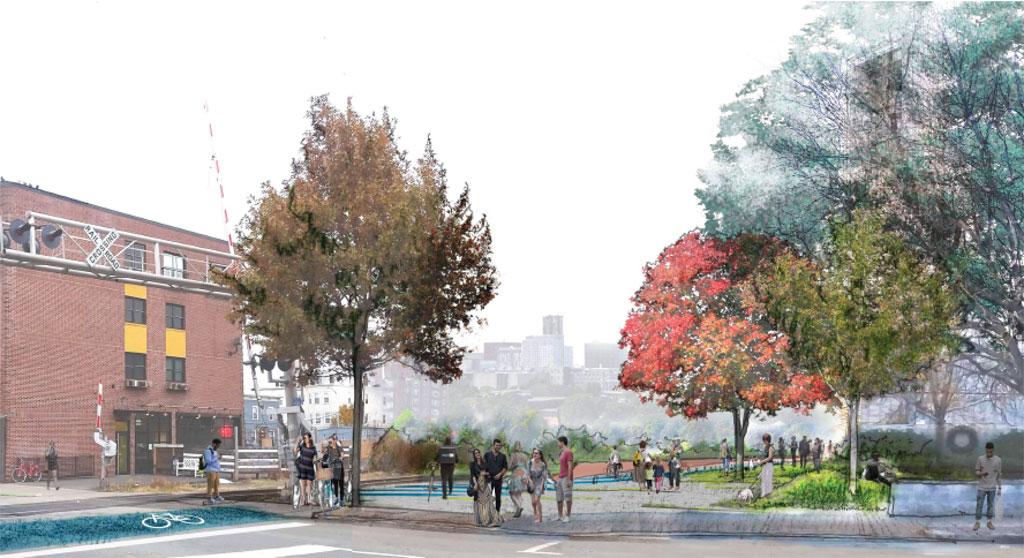 A rendering of the Grand Junction multiuse path proposed as part of a developer’s zoning request.

City Council, 5:30 p.m. Monday. The city manager gives opinions this week on a slew of things (including CambridgeSide mall redevelopment zoning), including some getting hearings in coming days, and turns over to the council a Historical Commission recommendation to landmark the EMF Building near Central Square. A new standout item is the arrival of the “nexus study” on how much big non-residential construction is required to be set aside for affordable housing to make up for resident displacement (caused by bringing in new, likely high-earning residents). Last amended by the council in 2015 with fears that raising the rate per square foot significantly could scare off construction, the new recommendation is to more modestly hike the rate to $19.10 from the current $17.10. “We are now just beginning to see the impact of the 2015 changes, as the first contribution under the 2015 incentive provisions was received earlier this year. Since then, more than $12 million in incentive contributions has been received in 2019,” the manager’s report says. “This recent activity is a dramatic change when considering that incentive contributions totaled nearly $5.5 million from the inception of the ordinance in 1988 to 2015.” Councillors, meanwhile, want mainly to check in the city’s Airbnb enforcement.

Ordinance Committee, 3 to 7 p.m. Tuesday. This committee run by city councillors Dennis Carlone and Craig Kelley will begin by looking at whether to allow mobile fueling apps such as Yoshi and Filld to operate in Cambridge, letting drivers summon gas trucks to fill their tanks instead of going to a gas station themselves (hint: unlikely) and on adding a fuel pump warning label to remind drivers of the impact of fossil fuel consumption. The latter half of the meeting – actually a second meeting – looks at the refiled petition to add a Grand Junction Pathway Overlay, easing the way toward a multiuse path through Cambridge in exchange for some development-friendly zoning where Kendall Square meets East Cambridge. Televised.

School Committee, 6 p.m. Tuesday. Committee members are expected to talk about the conflict between the expected size of the Vassal Lane Upper School after construction and the goals set by the Innovation Agenda in 2012, since Vassal Lane will likely have about 150 more students than has been considered ideal. And another thing known to be on for this week might be a doozy: A recently released report on an “N-word” incident from early this year. A closed-door session on a union grievance follows.  Televised.

Planning Board, 6:30 p.m. Tuesday. Recreational marijuana shop applications will heard – Bhari at 45-51 New St.; Budega at 1686 Massachusetts Ave.; and Charles River Remedies at 31 Church St. – and the board gets time to talk over the same mobile fueling apps being discussed earlier in the day by city councillors. Televised.

Ordinance Committee, 2 to 4 p.m. Wednesday. This televised committee meeting is on a potential prohibition on natural gas infrastructure in new construction. Then councillors break for at least an hour and a half before meeting again …

Ordinance Committee, 5:30 to 7:30 p.m. Wednesday. In the fourth and final leg of the Ordinance Committee marathon this week, councillors Carlone and Kelley lead a discussion on a Harvard Square Zoning Petition that would encourage more housing and retail, reduce parking, and limit chain businesses and how much street frontage could be used by financial institutions and recreational marijuana shops. Televised.

This post was updated Dec. 10, 2019, to correct an error from the Planning Board agenda.