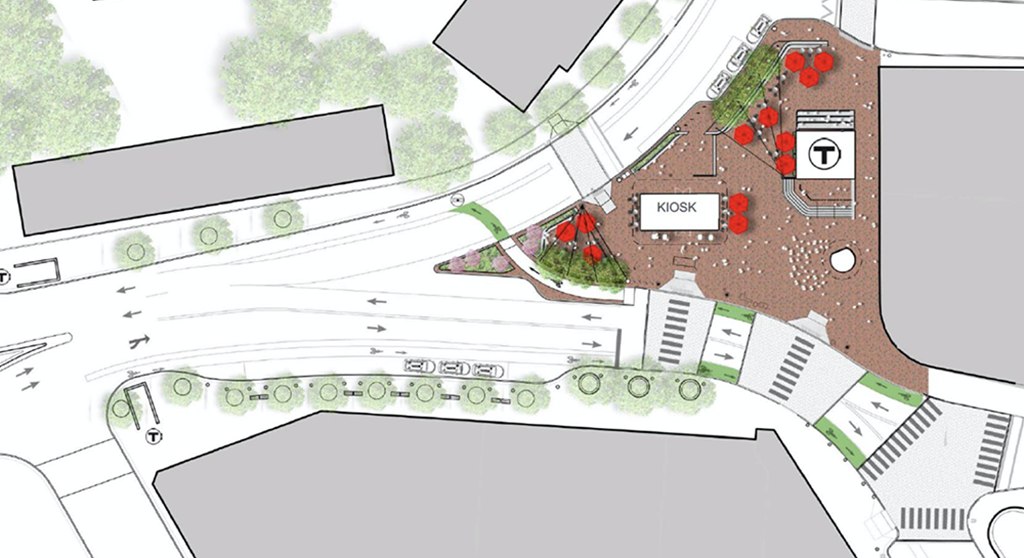 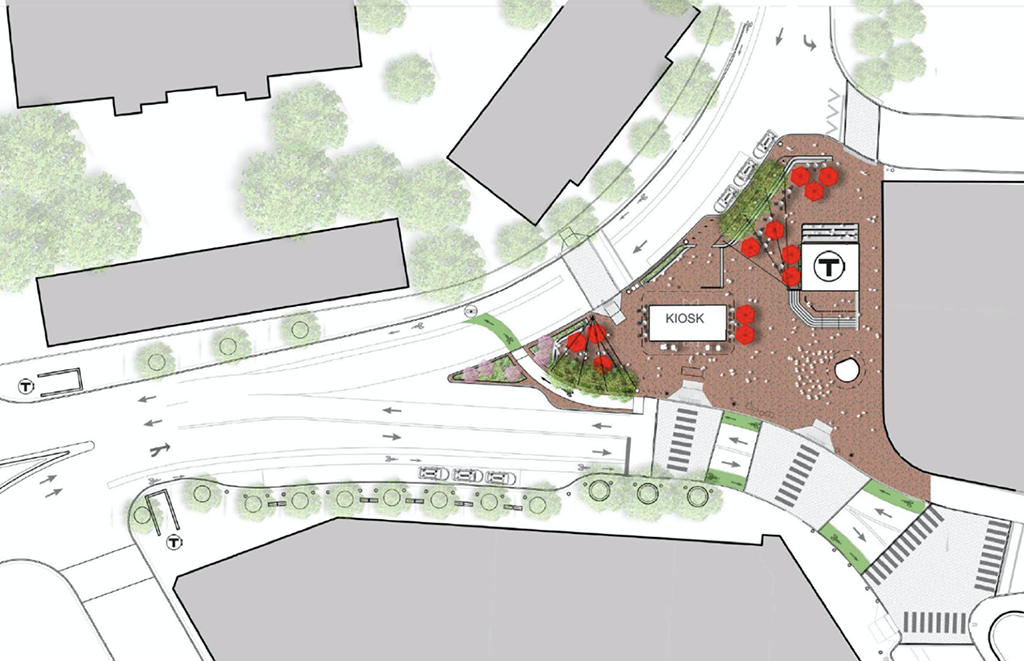 Traffic changes to Harvard Square were looked at in a Dec. 5 city study of plans for its kiosk and plaza.

City Council, 5:30 p.m. Monday. After two months largely on break. the council and city manager meet again, with 26 items on the city manager’s agenda, a dozen policy orders and a few items returning because they were set aside at previous meetings – including potential financial help for the city’s arts nonprofits (councillor E. Denise Simmons, who caused this chance at aid to be frozen since July 27, has her own order seeking help for those nonprofits and other “marginalized, underrepresented” business to get the aid); and a proposal to put traffic enforcement in the hands of unarmed staff instead of police. Another piece of lingering business: What to do about the city manager’s contract, which came out of committee in July technically with a two-year suggestion based on the difficulties of running a proper search for a replacement, but enabling negotiations that resulted in an 18-month suggestion. Some councillors want just one year.

New policy orders include a call to study closing “several blocks of streets in Harvard Square as soon as possible to vehicular traffic,” except for deliveries, doubling down on a proposal to close some streets during the summer that was never acted on (and given urgency by a recent bicyclist death, like for a Transportation Committee meeting Wednesday).

There’s sure to be plenty of talk about this second chance at passing an Affordable Housing Overlay Zoning Petition, which arrives before the council with a 6-1-1-1 recommendation from the Ordinance Committee (which is made up of the full council), with those trailing numbers reflecting a “no” from councillor Dennis Carlone, a “present” from Patty Nolan and the absence of Simmons. There’s some new details from city planners to chew over Monday. The city also has amendments to a law that would oblige landlords to make the tenants they’re trying to oust aware of their rights and available resources to potentially fight to stay – or at least stay in Cambridge. And councillors want to support a state-level bill banning evictions for unpaid rent and foreclosures for missed mortgage payments during the coronavirus crisis.

With hints there’s a coronavirus vaccine in the coming months, councillors want a Vaccine Task Force created to ensure there’s equity in the “allocation and distribution of any vaccine that becomes available.”

The city manager will report on plans to save water and tell the public “as soon as practicable” about the possibility of dry and drought conditions, based on the crisis Cambridge suffered in 2016 – though right now the city says it has full reservoirs with up to nine months of water on hand even if it doesn’t rain. Speaking of water, the city says it plans to meet with IQHQ, which bought the 26 acres of blighted former recreation spot Jerry’s Pond along with the rest of GCP Applied Technologies in Cambridge (a $125 million deal in July), and nudge it toward compliance with what the city envisions for the site. Televised and watchable by Zoom video conferencing.

A Harvard Square brewery, and a cafe for The Port

License Commission, 9 a.m. Tuesday. (Yes, this is a new day and time from the Gang That Couldn’t Schedule Straight.) Wachusett Brewing said in July 2019 that it wanted to fill the 33 Dunster St., Harvard Square, space that had been John Harvard’s Brewery & Ale House for nearly 30 years before – and now it’s going in for its licensing to serve food, beer and wine until 11 p.m. weekdays and to 1 a.m on weekends, with seating for 220 and a full occupancy of 327. A 500-square-foot brewery is planned for the basement, and there’s planned space for live entertainment and games. Also, Cicada Coffee Bar is looking to serve at 106 Prospect St., The Port, which was the Out of the Blue Gallery until 2014 and the Shine gift shop until July 2017. Watchable by Zoom video conferencing.

School Committee, 6 p.m. Tuesday. The committee may vote to urge the state to skip MCAS standardized testing for the 2020-2021 school year and, if the state doesn’t, consider a district response “rather than test preparation and administration.” Among other things, members also want to look at how “to determine child care options [for] families and educators as soon as possible.” Televised and watchable by Zoom video conferencing.

A look at Canal District Kendall’s lab and arts project

Planning Board, 6:30 p.m. Tuesday. A 250-foot, three-tiered lab tower with 40,000 square feet of public arts and culture space at its base is the centerpiece of a zoning proposal from BioMed Realty – which hopes to rid Kendall Square of an aging Eversource gas transfer station at the same time. This plan was supposed to be heard months ago, but the coronavirus lockdown forced a delay and now this refiling. Televised and watchable by Zoom video conferencing.

Transportation and Public Utilities Committee, 1 to 3 p.m. Wednesday. This committee run by city councillor Jivan Sobrinho-Wheeler will talk about how to make the streets of Harvard Square safer, and about truck traffic regulations – topics of increased concern since bicyclist Darryl Willis, 55, died Aug. 18 trying to merge into the same lane as a tractor-trailer in the square. Now the two lanes in each direction there are being taken down to one in each direction, and a separated bike lane has been added. Televised and watchable by Zoom video conferencing.

‘Nonprofit row’ to get $8.4 million in upgrades

Cambridge Redevelopment Authority, 5:30 p.m. Wednesday. In addition to the formal approval to seek zoning for an Eversource substation at Kendall Square’s Blue Garage, the alternative to putting it on residential Fulkerson Street, it’s time to approve $8.4 million in improvements to the 93-99 Bishop Allen Drive “nonprofit row” building, begin bidding for contractors and figure out temporary tenant relocations. Watchable by Zoom video conferencing.