Pandemic zombies are at and in ‘Apple Cinema,’ and we have three very different Christmas picks 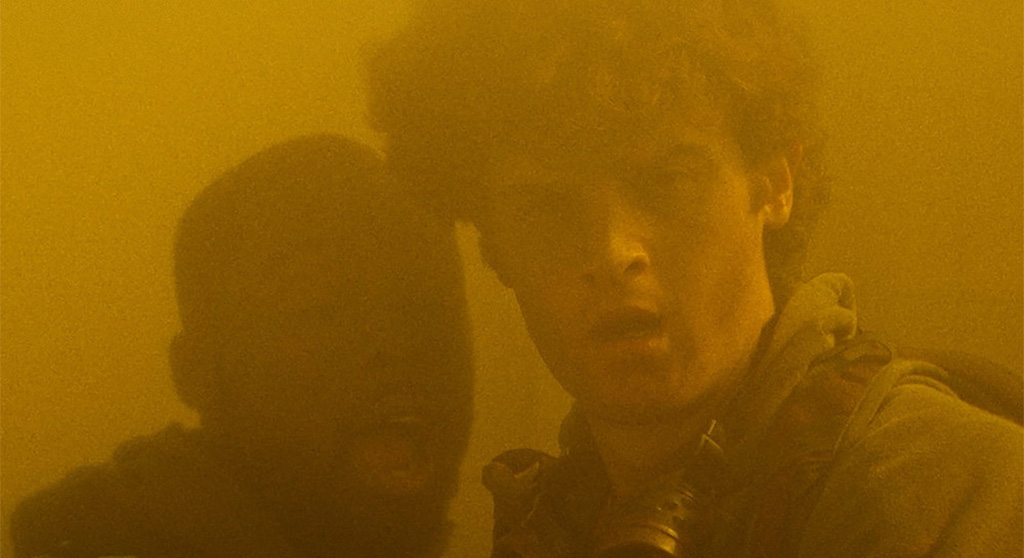 Pandemic zombies are at and in ‘Apple Cinema,’ and we have three very different Christmas picks

Of all the adaptations of Louisa May Alcott’s “Little Women,” including Greta Gerwig’s take on the story in 2019, none have quite captured the spirit as well as the 1994 version starring Winona Ryder and directed by Gillian Armstrong. While it may not be a Christmas movie in genre, its narrative is marked by celebrations of the holiday that show the passage of time. Its heart is in the bonds shared by the four March sisters as they adapt to rapidly shifting societal and familial dynamics while preserving the emotions that tethered them since childhood, demonstrating that almost any hardship can be endured as sisters. Armstrong infuses the holiday scenes in particular with a sense of wonder and whimsy, even in moments such as the March family giving away their holiday meal to a family in need, or Beth (Claire Danes) being gifted a piano from a kindly neighbor after facing a life-altering illness. What may seem mere fluff is a facade for a moving portrait of the preciousness of family, found or born into. (Ally Johnson) On Amazon Prime.

This Christmas musical-cum-horror trails a group of Scottish (and one American) high school students as a zombie pandemic interrupts their coming-of-age dreams and desires. It’s a lighthearted comedy until life-and-death choices need to be made about loved ones. The film’s rooted in the cancer struggle of Ryan McHenry, who wrote and directed the short film that inspired this feature. After his death, friend and co-writer Alan McDonald continued to develop the film with director John McPhail. The modest production, which unfurls over the holiday season, never feels amateurish, and the music’s quite catchy too – viewers might to find themselves singing hard-to-erase-from-the-head tunes such as “Hollywood Ending” long after the film ends. The mashup of “Shaun of the Dead” (2004) meets “High School Musical” (2006) also boasts healthy nods to “Buffy the Vampire Slayer” and Zack Snyder’s remake of “Dawn of the Dead” (2004). It’s a monster genre mash with the gift of bloody, sing-along fun. (Sarah Vincent) Free on Hoopla, Kanopy and Pluto TV.

During 2021 I spent a good deal of time chopping Bruce Willis down (see below) for inert, grab-the-paycheck-and-go performances. Each new Bruce endeavor had me honing my critic’s knife, and they never disappointed. But this cheeky, brilliantly scripted and well choreographed actioner is how the affable actor rose to notoriety (though he did win an Emmy for his infectiously irreverent PI on the TV series “Moonlighting” and would later crush it in “Pulp Fiction”), firing up his John McClane persona with casual, comedic, macho can-do – treading adroitly on Arnold’s turf while cutting an entirely new path. The setup has McClane, a New York cop visiting his West Coast wife (Bonnie Bedelia), caught in the middle of a terrorist siege of a corporate office tower where his estranged wife’s company is hosting a big holiday party. The film’s peppered with one-liners and a wicked game of cat-and-mouse between a manipulative criminal mastermind (the infallible Alan Rickman, making his big-screen debut) and Willis’ fly-in-the-ointment cop, no matter what coast he’s on. The casting choices are pure stocking stuffer gold.  Besides Rickman and Bedelia, Reginald VelJohnson is genuinely touching as the Twinkie-eating cop on McClane’s side; Hart Bochner is underappreciated as the smarmy corporate climber too full of himself for his own good; Robert Davi is the stiff FBI wonk late to the scene; and dancer-turned-imposing onscreen menace Alexander Godunov is one of Rickman’s operatives. It’s another anti-cheer holiday selection, but one that keeps on giving – rewatchable sans saturation. (Tom Meek) Free on IMDb TV, Peacock and Roku.

Only at the Brattle can you find a day (today) when you can catch Frank Capra’s timeless Christmas classic “It’s a Wonderful Life” and Prince in “Purple Rain.” That Capra 1946 gem, starring Donna Reed, James Stewart and the Scroogelike Lionel Barrymore, also plays Monday; that Prince curio plays as part of the Brattle’s ongoing  “Let’s Hear it for 1984!” programming with titles later in the week that include David Lynch’s “Dune” on Tuesday (might be interesting to take in and then see/re-see Denis Villeneuve’s reboot), Marisa Silver’s “Old Enough” on Wednesday, Alex Cox’s quirky, quotable cult classic “Repo Man” on Thursday and Walter Hill’s rock ’n’ roll fable “Streets of Fire,” with a very young Diane Lane as a rock goddess and Willem DeFore as an impish greaser menacing the streets.

For “Weird Wednesdays,” The Brattle serves up French director René Manzor’s wacky Santa slasher film “Dial Code Santa Claus” (aka “Deadly Games,” 1989) in which a young boy must stave off a bloodthirsty Santa. The film, presented in part by the American Genre Film Archive (and previously available only on VHS), is billed as “your new favorite holiday slayride.” To me it feels a bit like “Home Alone” meets “Silent Night, Deadly Night” (another 1984 film, for what it’s worth).

On Christmas Eve, The Brattle opens the cinematic gift of its “World of Wong Kar Wai” program with a screening of “The Hand” – Kar Wai’s 50-minute contribution to the 2004 omnibus film about sex, love and desire “Eros” alongside Steven Soderbergh (“Oceans Eleven,” “Traffic”) and the 90-year-old Michelangelo Antonioni (“Red Desert,” “The Passenger”) marking his last film as director. Kar Wai’s short spin features the impeccable Gong Li as a confidante and concubine in 1960s Hong Kong. The opulent 2000 tale of restrained passion and cheating spouses, “In the Mood,” plays with “The Hand,” sharing its setting and time and starring Maggie Cheung and Tony Leung as the spouses of those cheaters who form their own bond.

More undead fun, but with a hyperlocal flair: During the pandemic – or more specifically, during the lockdown – local budding filmmaker Conor Holway, who grew up in Cambridge and Lincoln, shot a zombie apocalypse thriller in the Apple Cinemas space at Fresh Pond Mall. The 48-minute film, aptly titled “Apple Cinema,” impresses in scope, degree of FX (you do see Boston getting blown away) and composition, especially considering the $35,000 budget. (Holway told me he thought he’d be living out of his car before it was done.) The survive-the-infectious-wave saga has Holway and friends playing a group of survivors hanging on in the theater. Outside are flesh eaters like the berserkers in “Word War Z” and an eerie mist that may be the cause of corpses coming to life. The script’s punchy, even addressing racism through a Tiger Woods and Phil Mickelson comparison, and the acting’s pretty respectable. The whole film has a tongue-in-cheek vibe but is never slack or lo-fi; the editing’s tight; and the mostly locally sourced hip-hop soundtrack is spot-on. It could make for a ghoulish double bill with “Anna and the Apocalypse.” Next up for Holway is a medieval fantasy that he says will be “bigger.” I can see it now: The Knights Who Say “Ni” take on the intestine-chomping hordes from “Night of the Living Dead.” (Tom Meek) Stream “Apple Cinemas” for free on YouTube.

Steven Spielberg’s bold remake of Robert Wise’s 1961 instant classic, which won 10 Academy Awards including Best Picture and Best Director, is an eye-grabber in its own right. To be honest, I figured this was going to be a bad idea akin to Gus Van Sant’s inert redo of Alfred Hitchcock’s “Psycho”; thankfully, no. There are big upgrades, such as the realistic 1950s cityscapes, and the Shakespeare-inspired musical about forbidden love and othering feels relevant and fresh. Rachel Zegler and Ansel Elgort (“Baby Driver”) are more than fine as Maria and Tony, the Romeo-and-Juliet leads from opposite sides of the turf war between the working-class Jets and Puerto Rican Sharks from neighboring San Juan Hill. The real stars are Mike Faist, excellent as Riff, the unwavering leader of the Jets; David Alvarez as Bernardo, the de facto leader of the Sharks; and Ariana DeBose, who knocks it out of the park, bringing fire and vulnerability to the part of Bernardo’s girlfriend, Anita – the role Rita Moreno won an Oscar for in the 1961 film. The 90-year-old Moreno’s in the film too, as a shopkeeper who gives Tony shelter and a second chance. (If she captures your eye in either version, might I suggest the documentary “Rita Moreno: Just a Girl Who Decided to Go for It,” streaming on Netflix?) (Tom Meek) At Landmark Kendall Square Cinema, 355 Binney St., Kendall Square; Apple Cinemas Cambridge, 168 Alewife Brook Parkway, Cambridge Highlands near Alewife and Fresh Pond; and AMC Assembly Row 12, 395 Artisan Way, Assembly Square, Somerville.

Bruce Willis appeared in eight films in 2021, of which I’ve have the displeasure to witness half – “Apex” and “Cosmic Sin” among the stinkers. Not one of those films has garnered greater than a 5 rating on IMDb, and they’re mostly down in the 3 range, where films made by Steve Bannon (yup, Trump’s strategy guy) linger. Watching “Fortress,” like “Apex,” you’ll find few scenes where Willis’ retired CIA operator appears onscreen with another actor. Clearly the “Die Hard” star shot his scenes all in one day before fleeing the set. The stitched-together reaction/interaction results are campily awful, with Willis looking like someone tossed a loaded diaper in the room. If you’re still wondering about plot, the secure hold of the title is a retirement resort for ex-CIA and military personnel of high rank. In the meandering mix are cryptocurrency, a rogue military operation, Shannon Doherty, women in teeny-tiny shorts and Chad Michael Murray aping Brad Pitt in “Fight Club.” Might be best if seen with edibles. IMDb says there’s a trilogy in the works, which leads one to wonder if director James Cullen Bressack is not the new Andy Sidaris. Available to rent or buy on Amazon Prime Video, Apple TV+ and other services.