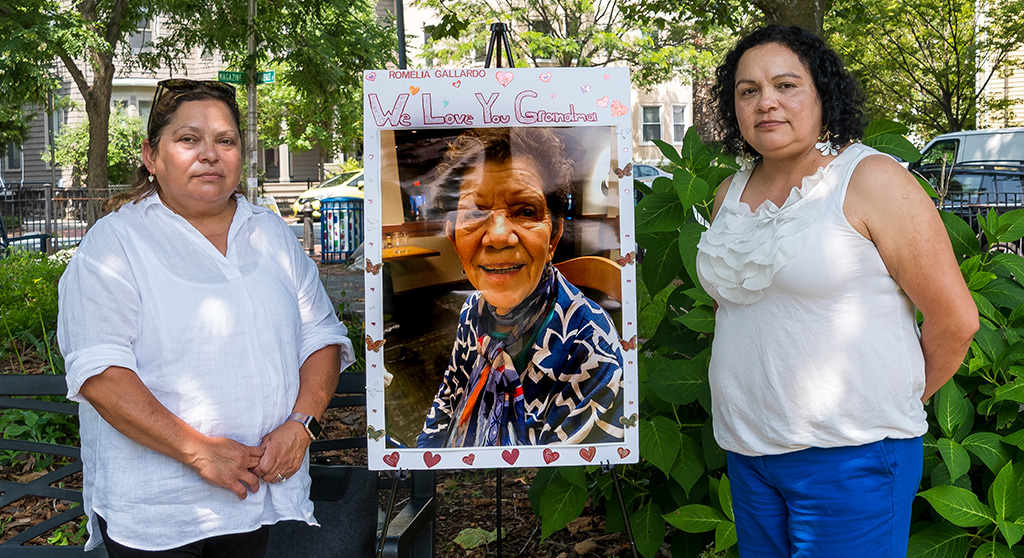 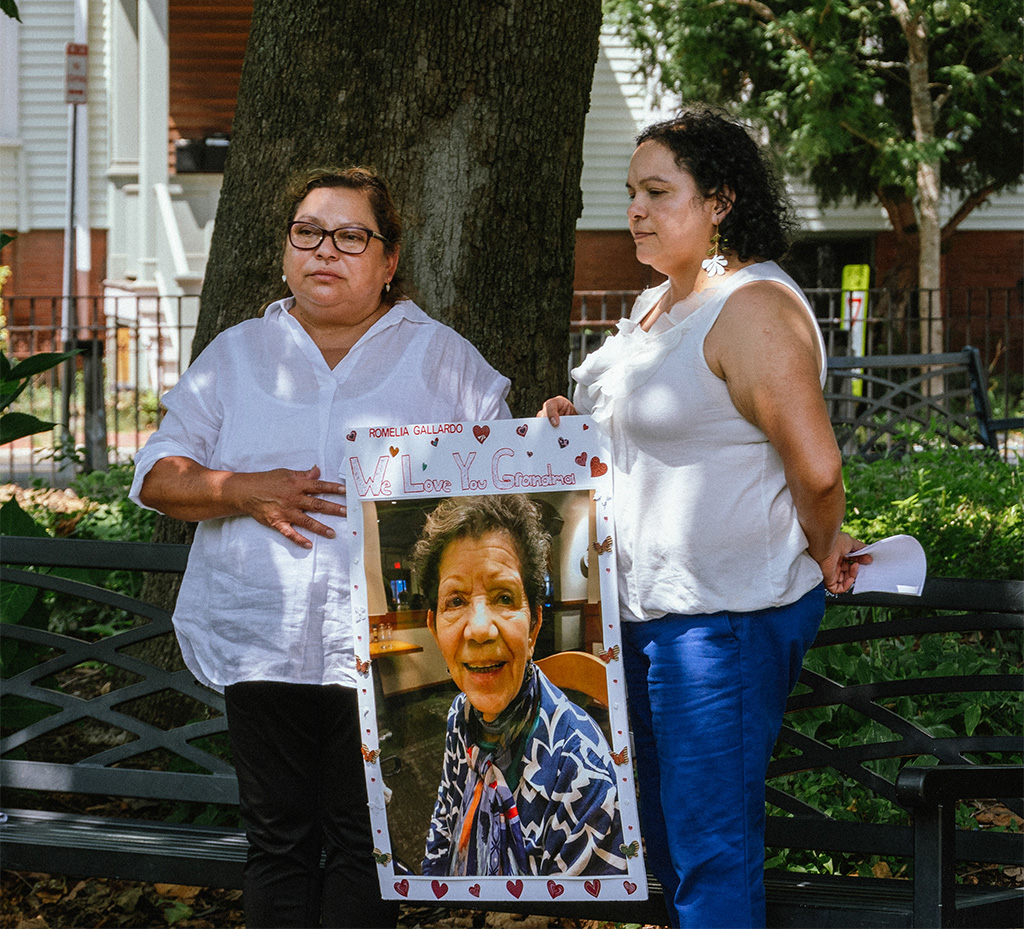 Eleonora Mazariegos, left, and Dora Gallardo at an August press conference at which they talked about their mother, Romelia Gallardo. (Photo: Tyler Motes)

Ashley Monturio, accused three years ago of fleeing the scene to go to a job interview after running over an 80-year-old, didn’t know her SUV had hit the victim, stayed at the site for almost seven minutes and was parked less than a block away while police hunted for her, her lawyer said Monday.

“She’s hiding in plain sight,” attorney Thomas Hoopes of Boston said on the first day of Monturio’s trial in Cambridge District Court. “It’s a tragic case. And oftentimes in a tragic case, human nature, they want someone to blame.”

The accident killed Romelia Gallardo, a resident of the LBJ public housing, who was hit as she wheeled her walker through the parking lot of the development at 150 Erie St., Cambridgeport, on Sept. 6, 2018. LBJ houses low-income elders and younger disabled tenants. Monturio, 44, of Pembroke, is charged with leaving the scene after causing personal injury. If convicted, she could be jailed for up to two years and fined up to $1,000.

Video would also show “what was visible at the time that Ms. Monturio left,” the prosecutor said, referring to Gallardo’s injuries. The first police officer to arrive at the scene, Brian Hartunian, who got there after Monturio left, said in testimony Gallardo was “on the ground” with “blood all around her.” She was “compressed like a pretzel” and “her teeth had been knocked loose,” Hartunian said.

He could not find a pulse and said her injuries were so severe that at first he suspected she might have fallen from a balcony on the 12-story building. Minutes later, the manager of the development took him inside to look at the video from one of several cameras.

“Initially we thought this was a medical call, until we saw this video,” Hartunian said. “Then we knew she had been struck by a vehicle and run over.”

Hoopes, in his opening argument, said Monturio entered the parking lot because a mapping app had sent her to the wrong address for her job interview. She was looking down while stopped at the parking lot exit “as Ms. Gallardo comes up beside the car,” Hoopes said. “When Ms. Monturio looked up, Ms. Gallardo was nowhere in sight,” so she pulled out onto Erie Street. 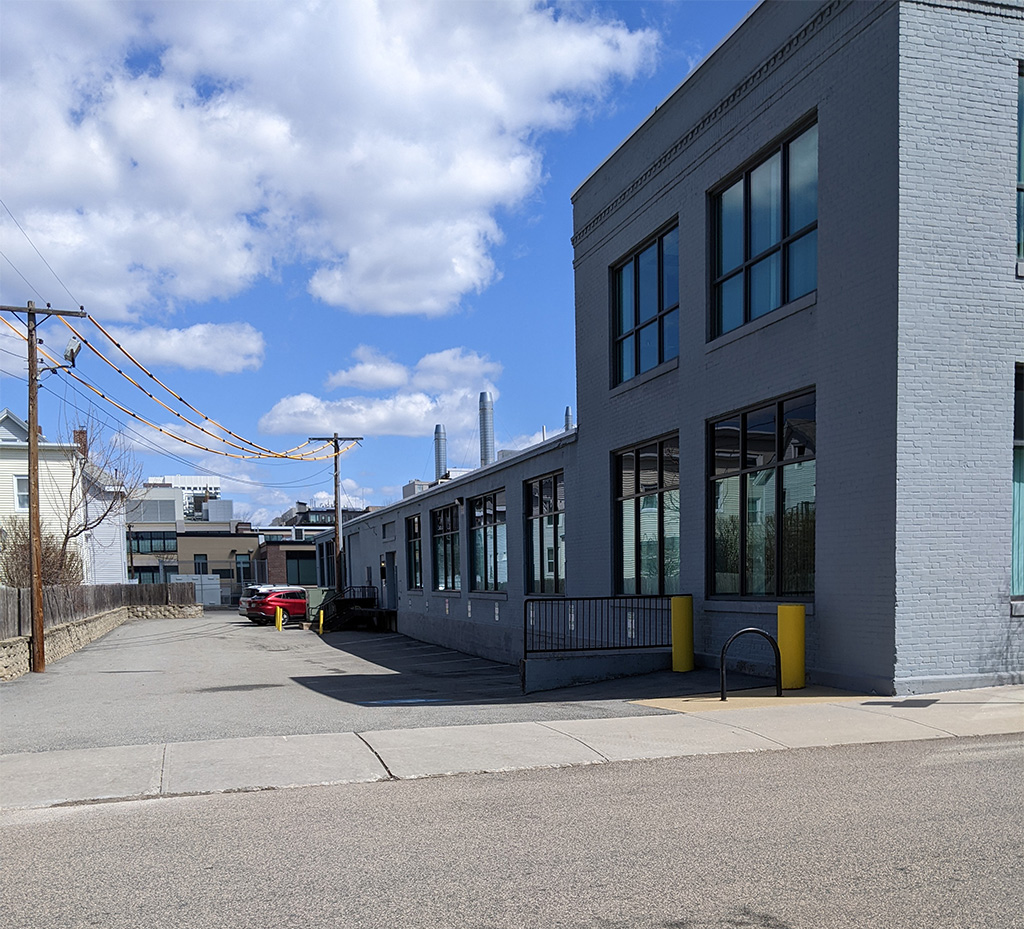 After leaving 150 Erie St., the driver of an SUV went less than a block away to 99 Erie St. for a job interview. (Photo: Sue Reinert)

Far from fleeing, Monturio stopped her car after seeing Gallardo on the ground in her rear view mirror, he said. “She did exactly what any person would want,” Hoopes said, calling Monturio a “good Samaritan.” Monturio called 911, reporting that Gallardo was bleeding but saying she didn’t know how Gallardo had fallen and did not know whether she was breathing, according to a recording of the emergency call played in court.

When the dispatcher requested her to remain until medical help arrived, Monturio said she needed to leave for a job interview and asked if the dispatcher could talk to someone else at the scene. “We prefer to speak to you,” the dispatcher said, but he did not object when she eventually said goodbye.

Monturio ended up crossing Brookline Street and parking at 99 Erie St., less than a block away, for her job interview.

Hoopes said the prosecution would claim that surveillance video showed the Infiniti going over a sizable “bump” when it struck Gallardo, but an analysis would show that the obstruction was about 1 inch tall. “There’s a bump coming in [to the parking lot], too,” he said. “It’s Cambridge, and there are bumps everywhere.”

The trial is run by District Court Judge David E. Frank; Monturio waived her right to a jury trial. She also agreed that she was driving the car. Family members of Monturio sat on one side of the section of the courtroom set aside for the public; Gallardo’s relatives sat on the other side. A number of people watched the trial via Zoom video conferencing, evidenced by the telltale squares filled with faces on a screen near the judge’s bench.

Despite the public interest, Frank said Tuesday’s session would be held in a much smaller room in the court, which is in Medford, because the initial space is needed for other proceedings.

Gallardo was one of two pedestrians killed by vehicles in the space of a month in the fall of 2018. The other person was Jie Zhao, 27, who was run over by a backing truck at Magazine Street and Putnam Avenue on Oct. 5, 2018. A jury found the driver, Daniel Desroches of Methuen, innocent of vehicular homicide by means of negligent operation.

The families of both Zhao and Gallardo have filed wrongful death lawsuits against the drivers and others. A trial in the Zhao family’s suit is scheduled for October 2023, well over a year away.