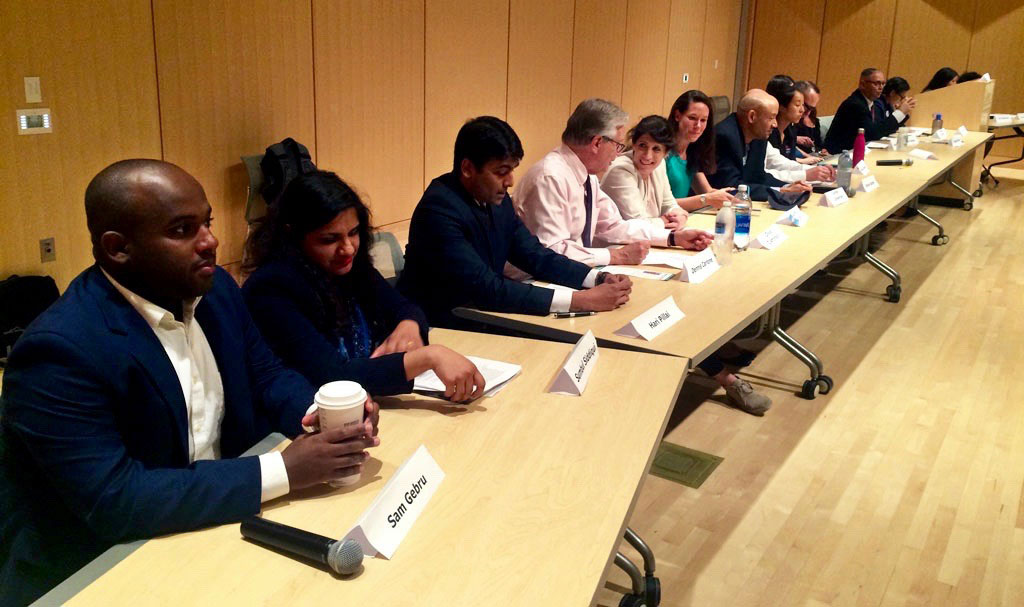 Even with many of 26 candidates for City Council missing, an election forum held Thursday spanned the wide stage of the Cambridge Main Library lecture hall and pushed time limits, addressing topics from housing and transportation to marijuana and local politics – such things as how candidates described their political philosophy, whether they were engaged in civic issues before running and whether they would be full-time councillors if elected.

But with the presidency of Donald Trump and its threats to immigrants, transgender people and other vulnerable populations and increasingly loud and violent displays of white nationalism nationwide, Cambridge’s racial and ethnic diversity played a newly prominent role in the dialogue – and not just because candidates, with almost all describing themselves as far to the left on the political spectrum, were asked how they would protect at-risk communities and what actions they’d already taken to do so.

The diversity of the 16 candidates making it to and through the Ward 6 Democratic Committee-organized full event spoke for itself, and even more candidates of color were missing from the event.

Among the full field are 10 people of color, or 38 percent of all candidates: Ronald Benjamin, Samuel Gebru, Richard Harding, Nadya Okamoto, Hari I. Pillai, Jeff Santos, Sumbul Siddiqui, E. Denise Simmons, Vatsady Sivongxay and Quinton Zondervan. Four are immigrants, and drew attention to it Thursday: Gebru, an Ethiopian born in Sudan; Siddiqui, from Pakistan; Sivongxay, from Laos; and Zondervan, from Suriname. Pillai, who is from Mississippi, made a point of noting that his parents emigrated from India. Ilan Levy, of Belgium, was not at the forum.

“My next-door neighbor is Kuwaiti” and clearly Muslim, Pillai said. “Right after the election on Nov. 25 we went to his mosque in Roxbury … I’m a very visible minority also, and there’s a lot of people who are my complexion getting stabbed, you name it, getting insulted every day. This impacts me. I stood up for my neighbor and said, ‘If you ever feel unsafe I’ll going to walk with you and we’ll be there together. Whatever bad that happens to you, will happen to me first.’”

Siddiqui, brought to the United States from Karachi at the age of 2 by family, said her resistance to hate and fear in America was “on a day-to-day basis. I’m a legal aid attorney, so I work with immigrants.”

“I also happen to be Muslim,” Siddiqui said. “After the election, even leading up to my decision to run, I was afraid. Do I want to run as a Muslim candidate? I was afraid of the remarks, perhaps – and to be honest, I have received here and there some Islamophobic comments. But you know what? That keeps me going. I have to do this, because we have people who are Muslim and in more vulnerable spots, and we can be a voice for the community.”

Zondervan said his origins in South America shaped his political philosophy. Seeing his native country being taken over by a military strongman, and being physically threatened by his forces, gave Zondervan an appreciation for human rights in America, his home since being sent away by his father to safety at the age of 15. “I believe in protecting everyone’s rights, including immigrants and Dreamers,” Zondervan said, using a term for undocumented immigrants who arrived as children and had been granted temporary legal U.S. residency.

Similar to Siddiqui, Sivongxay helps guide newcomers through the complex immigration system as part of her work as a lawyer. But Sivongxay, whose family fled Laos to escape the aftermath of the Vietnam War, had additional sensitivities to policies coming out of the White House – her extended family includes a transgender person – and cause to represent Cambridge. “We knew that Cambridge would be very open to immigrants, Muslims and Buddhists and Christians, and that’s what our family is comprised of,” she said. “I’ll continue to work on these accessibilities throughout Massachusetts.”

Gebru reminded voters of some of his public work, when as a senior at Cambridge Rindge & Latin School inspired to help Muslim friends, he led a successful effort to get an Eid holiday recognized and put alongside Christian and Jewish days off from the academic calendar.

Okamoto nodded only briefly to her identity as a person of color and is not an immigrant, but said White House immigration policies were personal to her because her campaign workers included undocumented immigrants.

Olivia D’Ambrosio, who is white, acknowledged she was one step further removed from fears whipped up by White House policies. “I am gay person, and I am a woman and I am an artist, and while those populations are not at the front of the line of [danger], we are in line,” D’Ambrosio said.

Sean Tierney lampshaded his distance from such threats – after proposing that municipal government go where undocumented immigrants are most common, to defeat fears some might have of entering City Hall – by saying, “As one of the straight, white males running for office, I listen more and talk less.”

The two incumbents at the forum, councillor Dennis Carlone and vice mayor Marc McGovern, could point to policy work from previous terms, including a unanimous order affirming Cambridge’s identity as a sanctuary city and keeping funding flowing if Trump’s administration succeeds in cutting off federal funding to such cities. The council has also explored a city-backed legal defense fund for immigrants and city-issued ID cards. McGovern launched an immigrant affairs liaison out of his office, and raised the immigrant coordinator to a paid role in the next fiscal year budget.

Race and the race

The council has nine members; three members decided not to run in November, including two people of color: Leland Cheung and Nadeem Mazen, the first Muslim elected to a government post in Cambridge and Massachusetts.

Census data say 27.1 percent of Cambridge’s 110,651 residents are foreign-born, and 66.6 percent of residents are white; 11.7 percent black; 15.1 percent Asian or Pacific islander; 7.6 percent Hispanic; and 6.6 percent are self-identified as another race or a member of two or more races. Among ethnic groups in the city, West Indians and Subsaharan Africans each represent about 3 percent of the population.