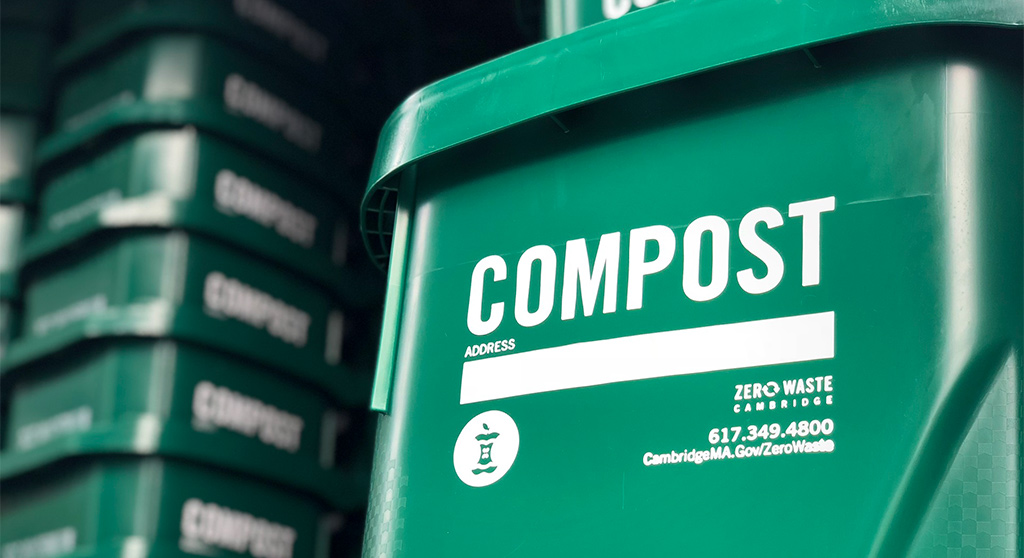 A call to extend composting to small business is back on the City Council agenda. (Photo: City of Cambridge)

City Council, 5:30 p.m. Monday. Though a policy prohibiting the use of tear gas by Cambridge police is in the works, councillors are bucking Law Department advice from last week and proposing an ordinance in addition. Councillor Quinton Zondervan also looks to reconsider last week’s vote around the lack of transparency of a task force reimagining the city’s public safety, which convened under promises it would not be public – and for which it was revealed last week there are no minutes being kept. The council agreed that there be some kind of reports made from the committee, though Zondervan had been pushing for more.

This is also the do-or-die meeting for developer Cabot, Cabot & Forbes’ plan to remake its own 16 acres in the Cambridge Highlands. This is the zoning proposal that includes a bridge over Alewife train tracks to pair with a proposed city bridge, and CCF has a new letter of commitment for the project that it says guarantees that bridge’s completion by making the company’s certificate of occupancy depend on it. The letter could have the promises councillors need to pass the zoning instead of letting the petition expire.

On the coronavirus front, a few councillors want the city to walk back its economy-based loosening of indoor capacity rules and cancel the reopening of large indoor performance venues at half capacity, which is expected to happen March 11, and “go on record renewing its desire for data and scientific research to drive pandemic decision-making.” The battle for Riverbend Park is back too, after a few scant weeks off the agenda, with councillors asking that the stretch of Memorial Drive near Harvard Square that makes up the “park” be closed to traffic sooner than normal, and farther down, to provide space for socially distanced exercise.

There’s also an order to try a composting program with at least 100 small businesses, after the council asked in 2018 for city staff to explore having a program in place by the end of 2019; city staff produced nothing despite another order in 2019 asking for an update. A call to ask how much City Hall stationery is bought locally is surprisingly narrow considering it comes from E. Denise Simmons, who calls frequently for fellow councillors’ orders to be broadened. (For instance, why look at whether the police commissioner answered a question about having “military equipment” truthfully when the council could instead call for a review of “any systemic racism blind spots” in the whole of city government?) A bigger question is how City Hall has responded to an October 2018 order to help all sorts of local businesses become municipal vendors, which City Manager Louis A. DePasquale said the next month he hadn’t even known about.

Starting search process for a next city manager

Government Operations, Rules & Claims Committee, 3 to 5 p.m. Tuesday. This committee run by city councillor E. Denise Simmons will meet “to discuss the initial steps that must be undertaken to establish the search process for the next City Manager,” which is strikingly careful language after the council raced pell-mell into a premature contract extension approval for City Manager Louis A. DePasquale in September, violating the process they agreed to publicly.

Planning Board, 6:30 p.m. Tuesday. The board gets a proposal for recreational marijuana in Harvard Square. A local group wants to open a franchise of the cannabis chain Cookies, which has a lease for the 2,539-square-foot ground-floor space that was once a Staples in the Crimson Galeria. Opponents are uncomfortable with the site being across the street from Winthrop Square park; an organization for racial equity in the cannabis industry has called that opposition racist. Televised and watchable by Zoom video conferencing.

Cambridge Redevelopment Authority, 5:30 p.m. Wednesday. The board of this agency overseeing Kendall Square development (and mitigating its effects on the rest of the city) looks at its next five-year strategic planning process. Watchable by Zoom video conferencing.

School Committee special meeting, 6 to 8 p.m. Thursday. The committee meets for a presentation of the proposed school district budget for the 2022 fiscal year, which starts July 1. Televised and watchable by Zoom video conferencing.