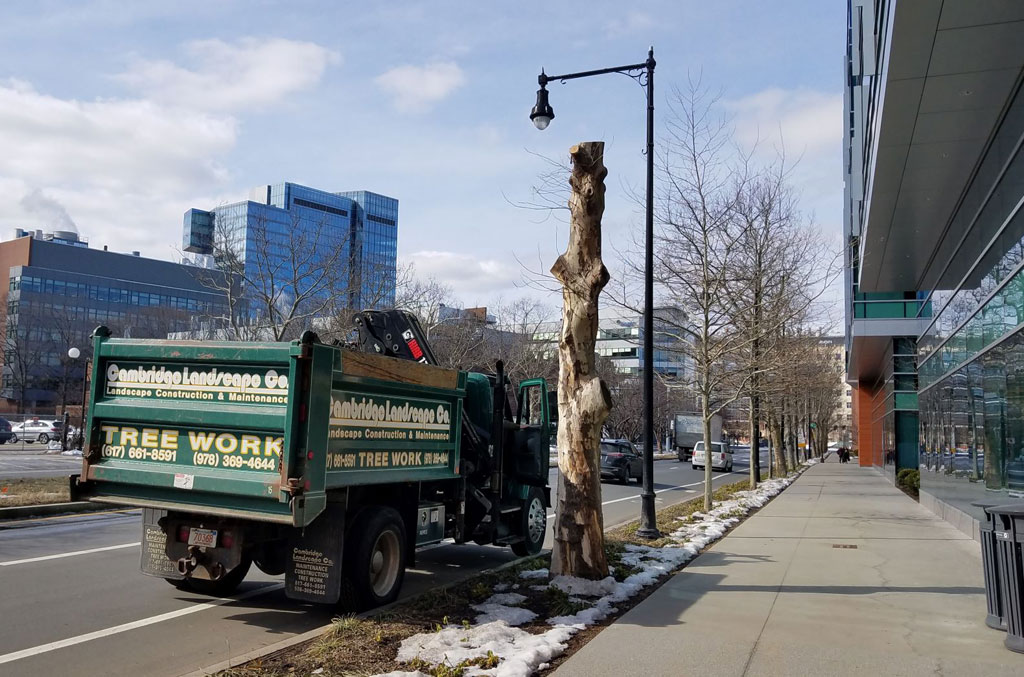 At least five trees were taken down Saturday in Kendall Square, resident Charles Teague said; this photo was taken on Binney Street.

Possible pause on tree removals gets new chance, changes on lodging houses and retail are asked

City Council, 5:30 p.m. Monday. Councillors get a new chance to put a tree-cutting moratorium in place until the Urban Forest Master Plan Task Force comes forward with its own plan – coming up soon – as greenery disappears with fearful speed from around the city. Residents are also taking a swing at prohibiting leaf blowers, and there are councillor orders to allow more single-room-occupancy lodging houses (bumping up affordable housing options) and to speed efforts to rezone and adapt to a changing retail environment (including maybe hiring more city staff to get it done).  There are councillors opposing a proposed MBTA fare hike, asking for an additional election polling place to match the population surge in Alewife and seeking to involve the Volpe National Transportation Systems Center in Kendall Square in a micro-mobility regulation program, figuring out how to manage all the app-managed bikes, scooters and other new forms of transportation popping up and complicating city streets. City staff is also being nudged to respond to am aging request about letting small businesses allow acoustic entertainment without a license. The city manager, meanwhile, seeks $4 million for roof replacement at the Graham and & Parks elementary school and $600,000 for shoreline and landscape improvements at Magazine Beach. Televised.

Human Services & Veterans Committee, 10 a.m. to noon Tuesday. This committee run by city councillors Alanna Mallon and Sumbul Siddiqui will explore the death of Somerville’s Laura Levis outside CHA Somerville Hospital in 2016 and why the Cambridge Health Alliance acted to evade responsibility in the case. Televised. The committee meets at City Hall, 795 Massachusetts Ave., Central Square.

Transportation and Public Utilities Committee, 2 to 4 p.m. Tuesday. This committee run by vice mayor Jan Devereux will discuss the MBTA’s Better Bus Project report and its proposed changes to bus lines and service throughout Cambridge. The conversation continues at 6 p.m. at another location and under other auspices. The committee meets at City Hall, 795 Massachusetts Ave., Central Square.

Athletic eligibility policy to be rolled out in spring

School Committee Athletic Eligibility Ad-Hoc Subcommittee, 2:30 to 4:30 p.m. Tuesday. Committee members discuss a policy to be rolled out in the spring season to keep more athletes working to raise their grades through probation, rather than be removed from athletics to improve on their own. The committee meets in the Dr. Henrietta S. Attles Meeting Room at Cambridge Rindge and Latin School, 459 Broadway, Mid-Cambridge.

MBTA community meeting, 6 to 8 p.m. Tuesday. Massachusetts Bay Transit Authority officials ask for public opinion on the Better Bus Project, a proposed fare increase for this year and a new fare system to replace the CharlieCard and CharlieTicket. The meeting is set for Cambridge Rindge and Latin School, 459 Broadway, Mid-Cambridge.

First chance to see public art proposed for the Foundry building, 6 to 8 p.m. Tuesday. Delayed by snow and other conflicts from Feb. 12, competitors Elisa Hamilton, Innovators for Purpose and Masary Studios present their art proposals for the city’s Foundry community building, with one to be chosen Feb. 28. At the Citywide Senior Center, 806 Massachusetts Ave., Central Square.

Planning Board (with the Cambridge Redevelopment Authority), 8 p.m. Tuesday. Two boards meet to continue a conversation from October about Kendall Square infill projects, specifically at 325 Main St., but planners also will consider a proposed medical marijuana dispensary at 229-231 Third St., near Kendall Square in East Cambridge, and a zoning change that could encourage a small hotel use, also near Kendall Square. Televised.

School Committee Curriculum and Achievement Subcommittee, 3 to 5 p.m. Wednesday. Discussion around creating a standardized way to get every district student transitioning from grade to grade with the necessary skills. The committee meets in the Dr. Henrietta S. Attles Meeting Room at Cambridge Rindge and Latin School, 459 Broadway, Mid-Cambridge.

Libraries ask what they can do for residents

Community forum about libraries, noon to 1 p.m. and 6:30 to 7:30 p.m. Wednesday and again from 1 to 2 p.m. Thursday. Officials seek “conversation about your hopes, dreams and aspirations for Cambridge and how the library can contribute.” The first session is set for the Boudreau library branch, 245 Concord Ave. on Observatory Hill in Neighborhood 9; the second and third will be held at the Cambridge Main Library, 449 Broadway, Mid-Cambridge.

Cycling Safety Ordinance could be added to city code

“Kissinger out of MIT and Boston” protest, from 2:30 to 4 p.m. Thursday. MIT Students Against War and five more groups mass to condemn an institutional invitation to the former secretary of state to take part in opening the Schwarzman School of Computing. “War criminal Henry Kissinger is responsible for the death and exploitation of millions of colonized and formerly colonized people across the globe, and we refuse to give this white supremacist and imperialist a platform to speak,” organizers say. The protest will be held on the lawn outside the Massachusetts Institute of Technology’s Kresge Auditorium, 48 Massachusetts Ave.

Urban Forest Master Plan Task Force, 6 to 8 p.m. Thursday. Consultants will present recommendations for tree planting and management and design options for planting strategies – crucial with disappearing tree canopy that can help protect against the ravages of climate change. The task force meets in the media library of Cambridge Rindge and Latin School, 459 Broadway, Mid-Cambridge.

Board of Zoning Appeal, 7 to 11:30 p.m. Thursday.  The news here is an attempt by residents and business owners to stop the Inman Square redesign, which they argue has skipped legally required steps. But the board will also consider a request to switch 82 Mount Auburn St., Harvard Square, from a retail space – for the J. Press clothing and tailor shop – into a restaurant called Dig (or the Dig Inn), with non-dining use of basement space. Ginger Exchange, at 1287 Cambridge St., Inman Square, is trying to counter a drop in business with four nights of karaoke a week; permission from the board might get the restaurant out of hot water with the License Commission, which has been unhappy to find karaoke taking place at Ginger Exchange without permission.

This post was updated Feb. 25, 2019, to correct that a Tuesday roundtable is about school redesign, not school budgeting.