Halloween scares and IFFB flicks in repertory; ‘Decision to Leave’ and ‘Black Adam’ are new 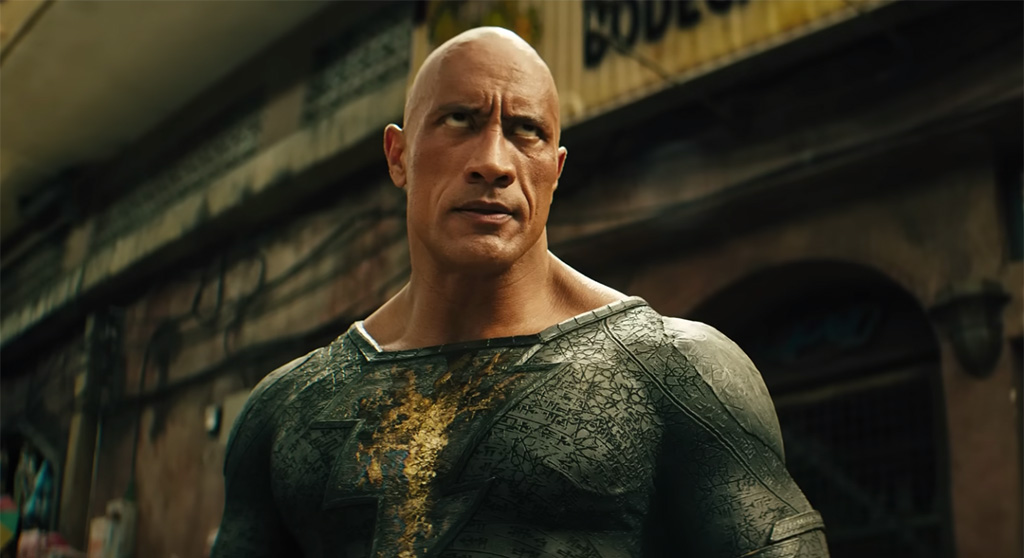 Halloween scares and IFFB flicks in repertory; ‘Decision to Leave’ and ‘Black Adam’ are new

The Independent Film Festival Boston’s Fall Focus sets up Thursday for a fast and furious four-day, 11-film stint at The Brattle Theatre. The focus has an international and feminine gaze to it. Opening-night film “Women Talking” by Sara Polley (“The Sweet Hereafter”), as implied, follows an indie A-list of those women, including Rooney Mara, Claire Foy, Jessie Buckley (“Men,” “I’m Thinking of Ending Things”) and Frances McDormand (“Nomadland”). “One Fine Morning” stars Léa Seydoux (“No Time to Die,” “Blue is the Warmest Color”) as a widowed young mother; “Broker,” the mini-fest’s centerpiece film, marks the latest from Hirokazu Kore-eda (“Shoplifters”); “Hunt” is a Korean spy thriller by Lee Jung Jae. The closing-night film is “The Inspection,” about a gay black man (Jeremy Pope) who joins the Marines in the age of don’t ask, don’t tell; his mother is played by Gabrielle Union. Another film to look for is “Armageddon Time” starring Anthony Hopkins and Anne Hathaway and directed by James Gray (“Ad Astra,” “The Lost City of Z”), a coming-of-age tale set in Reagan-era New York. Other Oscar winners on the docket in addition to Hopkins and McDormand are Olivia Colman (“The Favourite,” “The Lost Daughter”) and Colin Firth (“The King’s Speech”) in “Empire of Light” directed by Sam Mendes (“American Beauty,” “1917”); and “Causeway” starring Jennifer Lawrence (“Joy”) (“If Beale Street Could Talk”) in a tale about a soldier returning home to New Orleans. Brian Tyree Henry co-stars.

The Brattle wraps up its “Strange Invaders” series this week with “Slither” (2006, Monday), the big-screen debut from James Gunn (“Guardians of the Galaxy,” “The Suicide Squad”) starring Elizabeth Banks and Nathan Fillion as small-towners fighting an invasion of slugs whose mind control is not far off from Starro in “Suicide Squad”; “Attack the Block” (2011, Tuesday), in which a gang of delinquent teens takes on an alien invasion; and, on Wednesday, John Carpenter’s wholly inventive 1982 remake of “The Thing from Another World” (1951), which played The Brattle last week, swapping the Arctic Circle for Antarctica and bringing a whole degree of creepy FX to the shape-shifting creature from outer space. Carpenter’s regular alter-ego, Kurt Russell (“Escape from New York”), plays the can-do ET battler, and Ennio Morricone provides the electrifying score. (Tom Meek)

LQBTQA cinema comes into focus at the Harvard Film Archive this week with a presentation of “The Queen,” Frank Simon’s rarely screened 1968 documentary capturing the lead-up to the drag 1967 Miss All-America Camp Beauty Contest held in New York City. The film plays Friday and is shown in conjunction with the Houghton Library exhibit, “American Drag.” On Sunday the HFA kicks off its eyebrow-raising “Muff Dives: The Dyke Bar in Cinema” program (which runs through Nov. 4) with a series of international shorts made mostly in the 1980s that, as you can guess, take place in female-frequented watering holes. (Tom Meek)

The “Screens for Teens” (free films for young people and generally about them) at the Harvard Art Museums get in the Halloween mood with the Korean bullet-train thriller “Train to Busan” (2016), one of the better recent films of zombie apocalypse. It’s got elements of “World War Z” (2013) and Bong Joon Ho’s “The Host” (2006). The series is supposed to follow films with community-engaging discussion – issues relating to teens – and it should be interesting to see what that entails after a film about a train full of berserking zombies. Possible topics: “Barricading 101,” “What to do if a zombie bites you,” “Head shot basics” and “The many uses of duct tape.” (Tom Meek)

Halloween chills center the Somerville Theatre’s repertory programing this week with several from horror-meister George Romero (the 1969 zombie classic “The Night of the Living Dead,” “The Crazies,” “Creepshow” and “Day of the Dead”) and a pair from Francis Ford Coppola (the Roger Corman-produced 1963 slasher flick “Dementia 13,” set in a castle, and one of the legendary director’s more recent efforts, “Twixt” from 2011, about a horror writer who gets caught up in a curious murder). Also on the monster mash of throwback scares is “Willard” (1971), about a boy and his pack of killer rats, and its 1972 follow-up, “Ben”; “The Girl Who Lives Down the Lane” (1976), with Jodie Foster as a teen living in small New England town with her ever-absent father drawing the attention of her snoopy landlord and pervy, entitled son (Martin Sheen); and a double bill of ’80 and ’90s supernatural psycho-thrillers, “Angel Heart” (1987) starring Mickey Rourke, Lisa Bonet and Robert De Niro in an Alan Parker Big Easy horror mystery and, from Adrian Lyne (“9½ Weeks.” “Deep Water”), the what’s-real-or-not head trip to hell, “Jacob’s Ladder” (1990). On the cheekier side, there’s a midnight screening (officially at 11:59 p.m. Saturday) of the 1975 cosplay cult classic “The Rocky Horror Picture Show.” (Tom Meek)

This “’80s Frights” Retro Replay movie at the Landmark Kendall Square Cinema this week is Stanley Kubrick’s 1980 take on Stephen King’s The film, about a writer who goes off the rails mentally while looking after a haunted hotel during the shuttered off-season, has perfect performances by the small cast – Jack Nicholson as the possessed author, Shelly Duvall and Danny Lloyd as his imperiled wife and son, and Scatman Crothers as the cook who returns to check on things – and an eerie ambiance stewed up by Kubrick’s obsessive meticulousness, not to mention a mood-deepening score by Wendy Carlos and Rachel Elkind. If you still have a hankering for all things “Shining” afterward, the dreamy 2012 documentary “Room 237” chronicles some fan theories, such as the hotel hallway carpet designs representing ancient alien landing patterns laid out in fields. There’s also 2019’s “Dr Sleep” starring Ewan McGregor as that young boy, now a young adult dealing with the past trauma of the Overlook Hotel. (Tom Meek)

The latest from Korean director Park Chan-wook (“Oldboy,” “The Handmaiden”) is a dark crime drama in which the lives of a police detective and murder suspect intersect and fold in on each other. It’s a psychological thriller that has Hae-jun (Park Hae-il) looking into the curious death of a skilled rock climber who fell despite safety measures. Gathering the mountainside evidence makes for an interesting process, with a second detective strapped to Hae-jun’s back as they rope walk up the sheer surface. Suspicion falls on the wife, Seo-rae (Tang Wei), a Chinese immigrant who’s not quite fluent in Korean – did I mention that her departed husband was an immigration official? Hae-jun is a hands-on profiler sort and in scenes when observing Seo-rae, he’s suddenly in the room, a ghost to her, observing her. It’s a neat device Park throws at us that blurs the lines between reality and projection. It’s also a reflection of Hae-jun’s detached demeanor; he’s an insomniac, and has a strangely dysfunctional sex life with his wife. Natch, Hae-jun and Seo-rae have an attraction to each other that hangs dank and ripe in every scene they’re in. In the second part of the hypnotic slow burn, both have relocated to the same new city where Seo-rae is married to a fund manager and works as a caregiver to the old. It’s here that the film moves into darker territory, as Seo-rae is visited by a disgruntled client of her husband who slaps her around (the character is actually named Slappy) and there’s another death that cannot be misconstrued an accident or suicide. Of course Hae-jun is the one assigned the case. How Park lays down the cards does have reveals, but it’s mostly a deeply internal reckoning by Hae-jun. The film feels a bit like a true-crime noir and would make a perfect double bill with countryman Bong Jin Ho’s “Memories of Murder” (2003), about Korea’s first true documented serial killer. (Tom Meek) At Landmark Kendall Square Cinema, 355 Binney St.

Starting in Kahndaq, a fictional Middle Eastern country, 5,000 years ago, the same wizards as in “Shazam!” (2019) bestow godlike powers to an enslaved person known as Teth-Adam (Dwayne Johnson) to defeat a power-hungry tyrant forging a demonic crown. In the present, resistance fighter Adrianna (Sarah Shahi) hides the omnipotent crown from an evil enterprise oppressing her people and stealing their natural resources. Teth-Adam (dormant all those years in between) answers Adrianna’s cry for help and annihilates Kahndaq’s enemies, which alarms the Justice Society of America. With encouragement from Viola Davis’ CIA heavy Amanda Waller from “The Suicide Squad” (2021) and “Peacemaker,” Hawkman (Aldis Hodge) reunites with old friend Doctor Fate (Pierce Brosnan) and enlists new recruits – the graceful genius Cyclone (Quintessa Swindell) and Atom Smasher (Noah Centineo) – to battle Johnson’s newly minted Black Adam. But they prove inert against Kahndaq’s champion and garner jeers from Kahndaqians for their intervention. Director Jaume Collet-Serra, by-the-numbers here, relies too much on Zack Snyder-style slo-mo, which at times is insipidly tedious. The cast’s chemistry and running jokes help rescue an otherwise formulaic action film. Brosnan’s elegant performance stands out, and the post-credits scene will leave moviegoers begging for a sequel. The release date is serendipitous, coinciding with Iranian women protesting their government’s oppressive tyranny. It elevates the story of a merciless metahuman accepting a woman’s call for him to wreak havoc on their enemies and rejects the ethical generalization that killing is never the answer. Coupled with “The Suicide Squad,” the DC Universe seems to be taking a provocative stand on international politics and advocating for violent revolt. (Sarah Vincent) At Apple Cinemas Cambridge, 168 Alewife Brook Parkway, Cambridge Highlands near Alewife and Fresh Pond and AMC Assembly Row 12, 395 Artisan Way, Assembly Square, Somerville.