Overall, Cambridge crime levels are down to lowest levels since 1963, police report 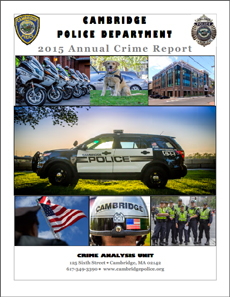 Overall, Cambridge crime levels are down to lowest levels since 1963, police report

Click on the above image to get the police department’s annual crime report. It will download automatically as a PDF.

Crime dropped in 2015 for the fifth consecutive year and to the lowest levels since 1963, police said Tuesday in releasing an annual crime report by the Cambridge Police Department’s Crime Analysis Unit.

In 2015, serious (property and violent) crime in the City declined by 1 percent, to 2,854 crimes, down 16 from the previous low of 2,870 crimes recorded in 2014, police said. “It marks only the second time the total has dropped below 3,000 incidents,” said Jeremy Warnick, director of communications and media relations for Cambridge police, in a press release. “For context, crime peaked in the City of Cambridge in 1974 with more than 10,000 crimes.”

Violent crime increased by one reported incident compared with historic lows in 2014, the report shows, while property crime decreased by 1 percent to unprecedented lows. A rise in burglaries was most significant for property crimes; they surged to 438 incidents from 286, an increase of 53 percent, but up 10 percent versus a five-year average.

“Statistics alone are of little use to patrol deployment and offer little to citizens interested in reducing their risks. The true picture of crime and disorder in a city is seldom conveyed to the public through simple statistics. Crimes are complex events, and these complexities encompass many dimensions,” the report says, using the burglaries figure as an example of why it uses multiyear averages rather than year-to-year comparisons, in which “there’s no way to tell from that figure whether 2014 was unusually low or 2015 was unusually high.”

“Analysis for the past 20 years points to two recurring murder scenarios in Cambridge: a domestic murder in which one family member is killed by another, and the murder of young males by a handgun or knife in acts of retaliatory street violence,” the report says, noting that 80 percent of the 30 murders committed in Cambridge since 2000 have been cleared by either an arrest or a suicide by the perpetrator – including all three murders in 2013 and 2015 and one of the two in 2014.

Among other notable incidents in the city last year, human remains were found in a duffel bag near Kendall Square April 4; there was a $100,000 drug- and gun-bust May 20; women suffered a series of summertime gropings; in late September a Harvard University tech computer lab manager was accused of using his school credit card for more than $80,000 worth of personal spending over four years; there was a lewd act committed on the altar of St. Sava Serbian Church Sept. 29; a potential attempt at kidnaping or assault Oct. 23; and days of bomb and shooting threats at city schools in early December.

“The historic low crime numbers in 2015 reflect a number of factors, including the outstanding work conducted on a daily basis by our officers, the collaborations we have formed with organizations throughout the community, and the responsiveness and support from our residents,” said Christopher J. Burke, the police department’s acting commissioner. “Additionally, these figures also indicate the success we are having with a number of programs and initiatives, [including] our overall community outreach.”