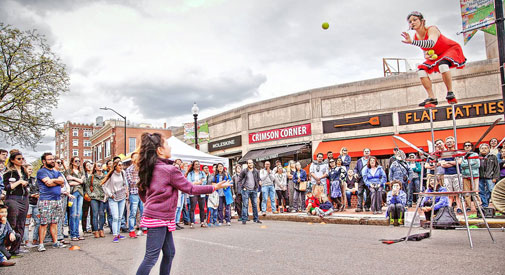 Arts and transportation optimism, and some agencies set examples
By Marc Levy

There were plenty of good things that happened in Cambridge over the past year. We saw government lead with initiatives such as creating a Legal Defense Fund for Immigrants that disbursed $250,000 in grants in October and funding a “universal playground” for Danehy Park, and institutions such as Lesley University take a leap forward with the purchase of more acreage near Harvard Square. Central Square gained strength and optimism with a business improvement district and mural refresh project under the guidance of business association president Michael Monestime. And even some businesses we thought we’d be mourning have lived for another day, with Keezer’s Classic Clothing moving closer to Porter after being displaced (joining fellow Cambridgeport refugee Baraka, which head chef Alia Meddeb relocated in 2016), while fights for the heart of Harvard Square continue with the ousted Crema Cafe as proxy. The choices below are further examples of good things in Cambridge, highlighting deep-rooted systemic changes that will – or at least could – have big payoffs in the future, sometimes just by setting an example.

Need to face some of the worst of Cambridge in 2018? Click here. 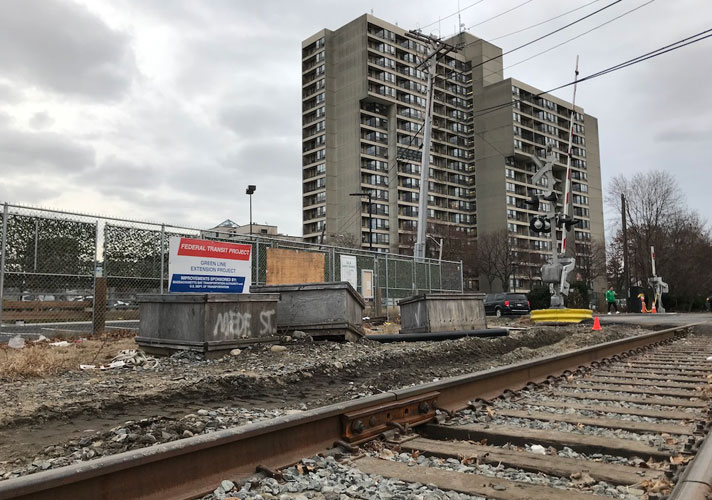 The Housing Authority keeps improving its stock no matter what.

As Cambridge’s long-term housing crisis continues to burn, consuming our lower- and middle-income residents in the process, let’s stop to appreciate the ingenuity, savvy and flexibility displayed by the Cambridge Housing Authority. It helps more than 5,500 low-income families, seniors and people with disabilities and looks tirelessly for ways to stay on mission, with much credit deserved for the ways it’s found to maintain aging housing stock even as federal and state funding disappears. It’s shown cleverness, persistence and a deep knowledge of how to make big government work as well as anyone could expect. Though we hate that it’s dealing with the sleazy, scandal-prone Wells Fargo, we respect how it’s handled the dilapidated Millers River in East Cambridge, enabling the planned Grand River Junction bicycle and pedestrian path while preserving the ability to develop away from it (and getting a better community center along the way). The agency does research and respects it, and seems willing to admit error, such as on its no-smoking policies. Keep it up, CHA; there are plenty of vulnerable people relying on you. 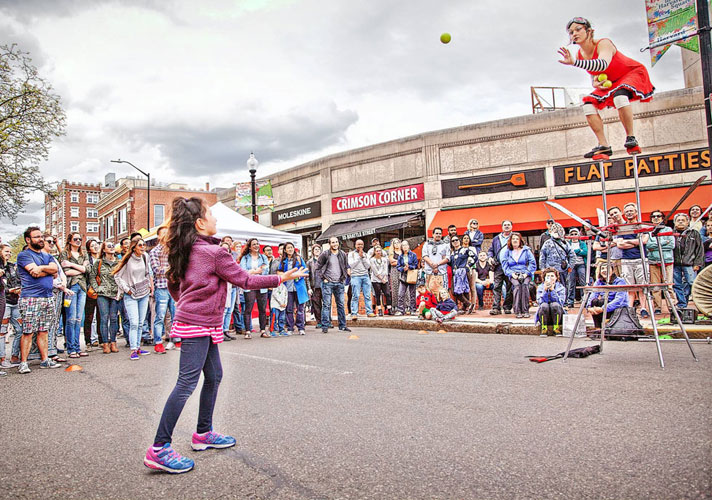 Cambridge works to welcome back the arts.

Even after the city saw the loss of the EMF music community near Harvard Square and heard plenty of pleas to help assailed artists, the Cambridge Arts agency made bizarre and utterly tone-deaf bids to hold on to busker fees that street performers don’t have to pay in either Boston or Somerville. We have the City Council to thank for overturning that recommendation; now we’ll see whether some creativity and vibrancy returns to our streets with the fees gone. And though we didn’t elect “arts councillor” Olivia D’Ambrosio in the previous municipal election, councillor Alanna Mallon has stepped ably into the role with her advocacy for the arts and chairing of the new Mayor’s Arts Task Force. (D’Ambrosio is not only doing great work at her Bridge Repertory Theater, but has joined the task force.) There’s cause for hope that the work will continue. The Central Square Business Association’s Monestime is doing his share to boost music and visual art in his state-designated cultural district, and Harvard Square also seems, at least temporarily, newly open to having art as destinations alongside its commerce. 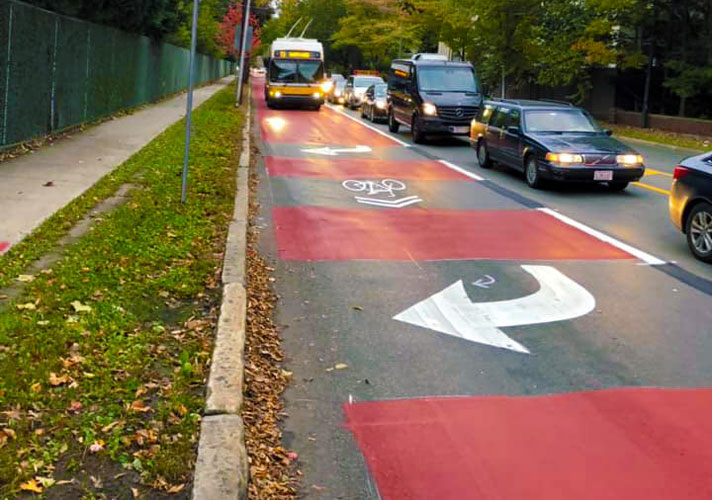 It’s awful that it still seems to take the death of a bicyclist to get action on our worst stretches of road, but that was the dynamic that played out again after the death of grad student Meng Jin over by the Museum of Science – and at least it highlighted the extent to which bicycle infrastructure has become the norm, with even the “bikelash” over protected bicycle lanes on Cambridge Street and in Harvard Square quieting as city transportation officials showed resolve on the issue, digging in their heels on an Inman Square redesign. The deaths of pedestrians Sam Bixler and Jie Zhao, both in their 20s, helped underline the importance of slowing traffic citywide, installing truck side guards and making more progress on Vision Zero road engineering. We saw effective work from city officials in cutting off Sherman Street train noise quickly and attention paid to a years-long struggle over noise from Logan Airport flight paths, as well as progress on the green line extension (with a cash payment) and a big leap forward for the Grand Junction railway path. With a Central Square intersection signal change proposal and a bus and bike priority lane installed from Watertown, it really seems like transportation improvements are on the move. Councillor Craig Kelley even hosted a transportation-themed conference this year with the Massachusetts Institute of Technology, and we learned our longest red lights won’t be that long … for long. 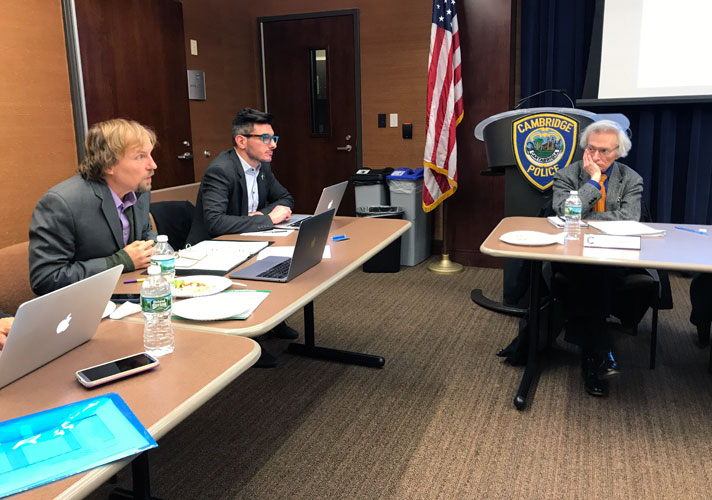 The Redevelopment Authority shows what’s possible as a government agency.

It wasn’t that long ago that the Cambridge Redevelopment Authority was mired in scandal and all but defunct. Now the agency tasked with developing the wasteland that was Kendall Square hasn’t just made a thoughtful argument for expanding its mission – that the success of the tech center reverberates throughout the city in the form of financial displacement that demands compensatory action – but has become almost Cambridge’s homegrown deus ex machina. Is the city about to lose a bunch of nonprofits from the sale of a building? The CRA might help buy it. Is the Margaret Fuller Neighborhood House struggling with its financial future? The CRA can provide a line of credit and a bunch of development know-how. Is it unclear how to get the Foundry community building open and on a self-sustaining path? The CRA will nurture it. Its board is stable and open-minded, its staff is thoughtful and intent on being helpful, and that makes it nimble in mission and a resource Cambridge is lucky to have. But there’s more to the agency than having money to spread around: It retains a willingness to listen to residents. Meetings are productive but indulgent of the occasional interruption or contribution from members of the public, and members answer questions along with making presentations. Its modest informality is a model for other boards and commissions in the city. 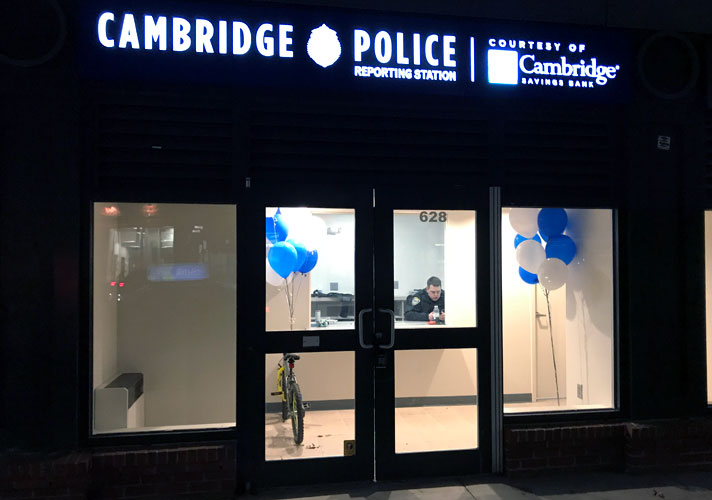 Police show their effectiveness and responsiveness.

Cambridge saw more than its share of violence this year, with bursts of gunfire shattering the calm more than a dozen times – often with no known victim, but sometimes resulting in blood. And though Police Commissioner Branville G. Bard Jr. got plenty of love for helping shepherd through a surveillance ordinance this year meant to keep residents safe from invasive technology, he’s squandered his civil libertarian cred on a bad judgment made from his seat on the License Commission. But we know Bard can run the department’s more traditional functions well enough: When called on to keep the peace in The Port after a bunch of those gunshot incidents, he swiftly put in place an 11-member team that cut reports of shots fired by 78 percent from its start June 19 to its disbanding Sept. 1, along with making 46 arrests and issuing more than 200 warnings for illegal behaviors such as drug possession, causing “significant disruption to drug markets.” As though to show how easy it is, the police under Bard then gave the city a Caribbean Carnival and parade held Sept. 9 that marched from Central Square to a daylong party in Kendall Square as usual, but defied a history of violence to take place without major incident. Bard completed his hat trick by signing an eight-year sublease for a police department substation on Carl Barron Plaza, something residents have asked for frequently since the police department relocated to Kendall Square from Central Square in 2009.