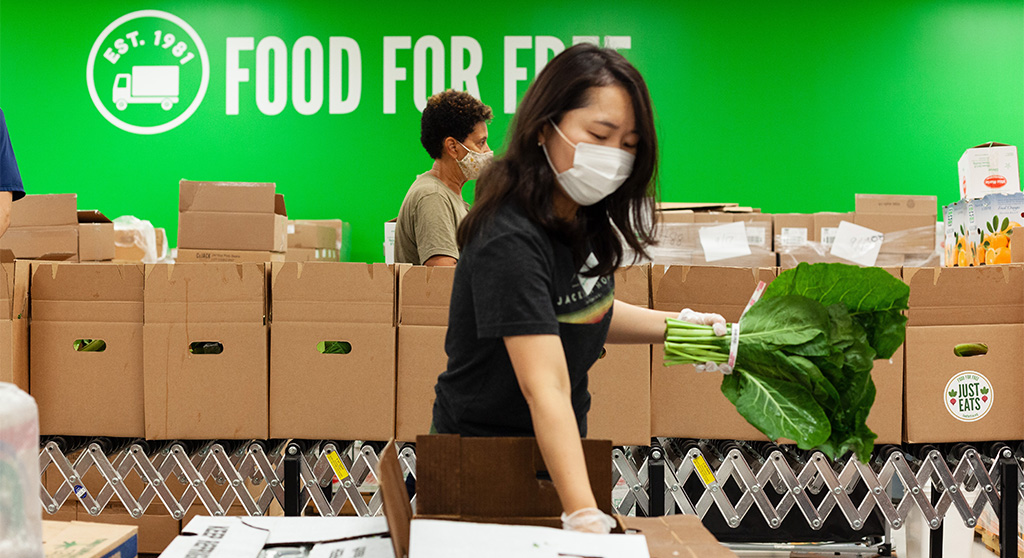 Businesses come back to life, the arts evolve and hungers are met
By Marc Levy

Coronavirus was the unavoidable backdrop to nearly everything that happened in 2021, and it colors this “best of” list: Much of what’s below is about how we responded to a pandemic and its effects. While the list is totally subjective, it is weighted toward topics and themes Cambridge Day covered repeatedly, with headlines piling up to make them at least feel more prominent and important. But lots of good things happened this past year in Cambridge that drew less enduring attention – and in some cases even had essentially nothing to do Covid-19. There’s the story of IQHQ and Jerry’s Pond, the case of a buyer of 26 acres who plans to work within existing zoning and with neighbors on reviving a nature area as a public resource. There are the steps that Patty Nolan and the rest of the City Council took to refresh a government charter that hadn’t been updated in 80 years. There was an initiative to offer $500 no-strings-attached monthly payments to 120 households over 18 months, which Mayor Sumbul Siddiqui announced in April. There was the Baldwin neighborhood name change led by Maya Counter, a resident of the neighborhood who is now attending Harvard College. And there was the rescue of the “Live Poultry Fresh Killed” sign and trademark rights from the closing Mayflower Poultry by the East Cambridge Business Association and its executive director, Jason Alves. But as to that subjective top five? Here are some big and enduring swings we took in 2021.

Need to face some of the worst of Cambridge in 2021? Click here. 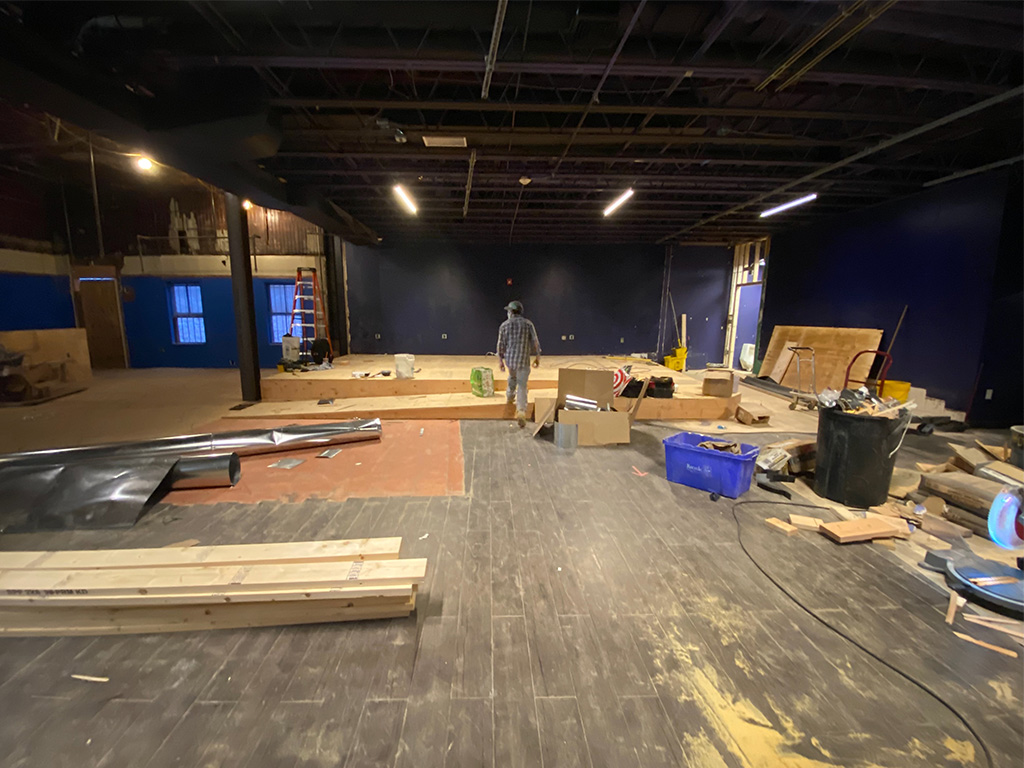 A revived ManRay was under construction in Central Square in October. (Photo: Marc Levy)

With so many restaurants, other businesses and arts institutions struggling often fatally with the pandemic, it was more than a relief as some came back to life – it was exciting. Each served as a needed reminder that even though Covid had lasted longer than anyone hoped, there were still good reasons to wait it out. We thought The Cantab Lounge was dead, but it came back with The Chicken Slacks performing and space for the Boston Poetry Slam in January; we thought People’s Republik was dead, but New Republik is preparing a space in Inman Square; we thought ManRay was long since dead, but original owner Don Holland has a crew renovating the former ImprovBoston space in Central Square (even if it’s missed an October opening by a wide margin). Live events such as Cambridge Carnival and The Seamus Heaney Memorial Reading returned, and The Brattle Theater and Somerville Theatre reopened, the latter with a Crystal Ballroom performance space. Toscanini’s ice cream is back in Lafayette Square on Sunday, and the tiny Toad nightclub in Porter Square is expected to finally revive shortly afterward. And we thought The Comedy Studio was gone forever to Somerville’s Union Square, but it’s back in the heart of Harvard Square next year, in the below-ground space of what was once The World’s Only Curious George Store. 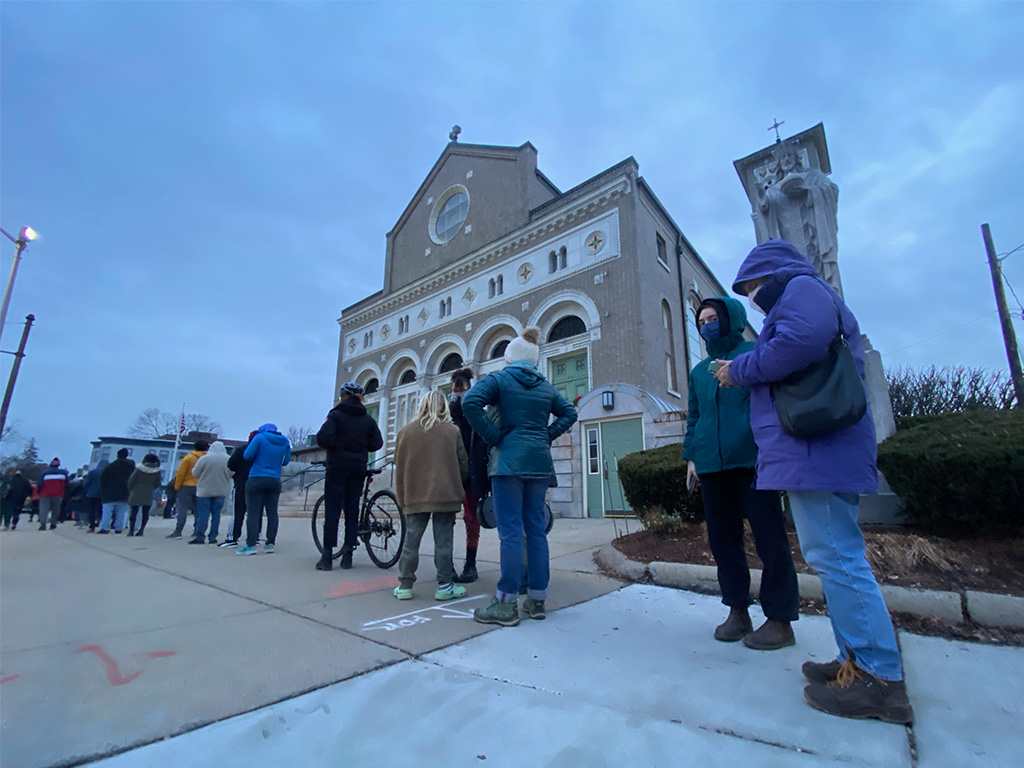 A line for Covid testing loops around the block Wednesday in North Cambridge. (Photo: Marc Levy)

City-funded testing is a model

While the city’s response to Covid has been flawed, the coronavirus testing it’s maintained and expanded has been efficient, fast and generous. Recognizing the importance of identifying infection to avoid the spread of a killer virus, the city has run testing systems and sites citywide and for various constituencies at no charge, and been willing to bring in outside staffing to add to the effort. The city’s bricks-and-mortar sites will test anyone, with no identification requirement, and the PCR tests bring results within 24 hours. Few communities have made testing so available and easy, and occasionally massive lines such as at the CambridgeSide site Dec. 20 may be “because the word is out now to go to Cambridge,” City Manager Louis A. DePasquale said. (The around-the-block line of hundreds Wednesday in North Cambridge may have grown as people realized there would be no testing for the next three days.) The efforts have been supplemented by city staff working to deliver free Covid-19 rapid antigen test kits to low-income residents. As 2021 wound down, locations in Harvard Square, North Cambridge and at the CambridgeSide mall had walk-in testing four days a week and appointment-only testing on Saturdays; on Wednesday the city announced that free testing would expand to seven days a week for January, adding CIC Health’s 295 Third St. location in Kendall Square into the mix by appointment. 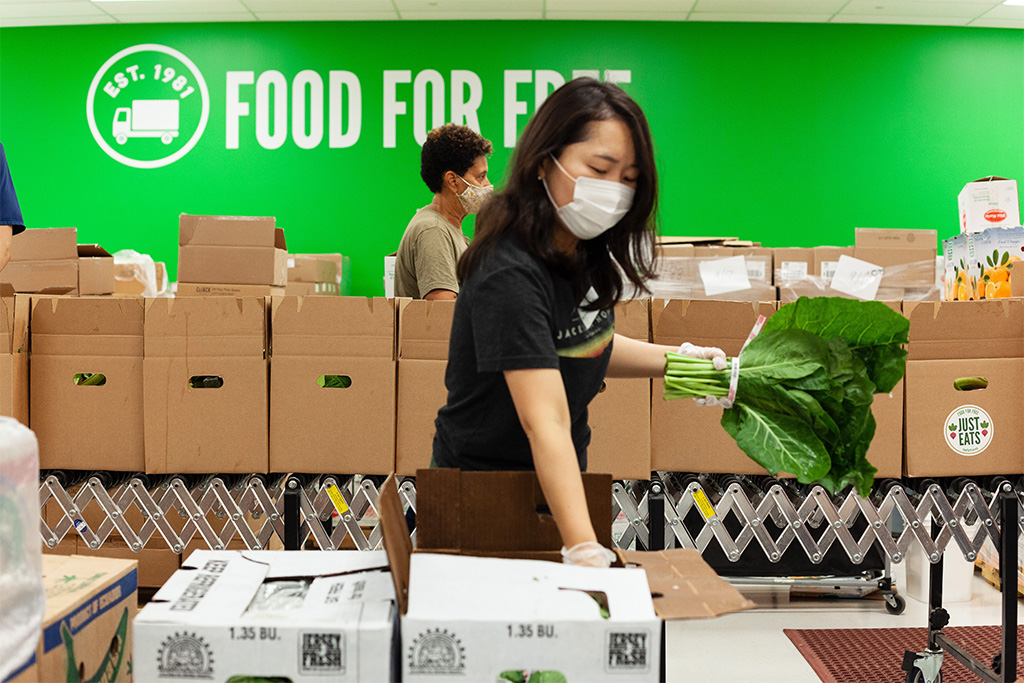 A Food For Free worker boxes up produce at the nonprofit’s expansion space in Somerville in October. (Photo: Food For Free)

Nonprofits’ work in the crisis has also been impressive, and in a city that cares so much about food, of course local efforts would shine in preventing hunger and ensuring nutrition and health. Central Square-based Food For Free expanded its regional deliveries so much that it went from 3,600 square feet of donated extra space in East Cambridge to an additional 12,000 square feet of its own in Somerville in July (winning nonprofit of the year from the Somerville Chamber of Commerce) and went on fundraising at an event in November with space and time donated by the restaurant Viale and its staff. Food For Free is part of the reason a Daily Table grocery store opened in Central Square in January, a third site for the community grocer with a mission of making healthy food affordable to everyone; and it partnered with the Cambridge Economic Opportunity Committee to encourage Daily Table shopping with gift cards. Residents contributed in more ad hoc ways as well, including by maintaining and stocking community fridges for the needy. The city’s third arrived in January. (Once on Church Street, it is listed at The Democracy Center, 45 Mount Auburn St., Harvard Square; the Harvard Square Business Association lists one at First Parish Cambridge Unitarian Universalist, 1446 Massachusetts Ave.) 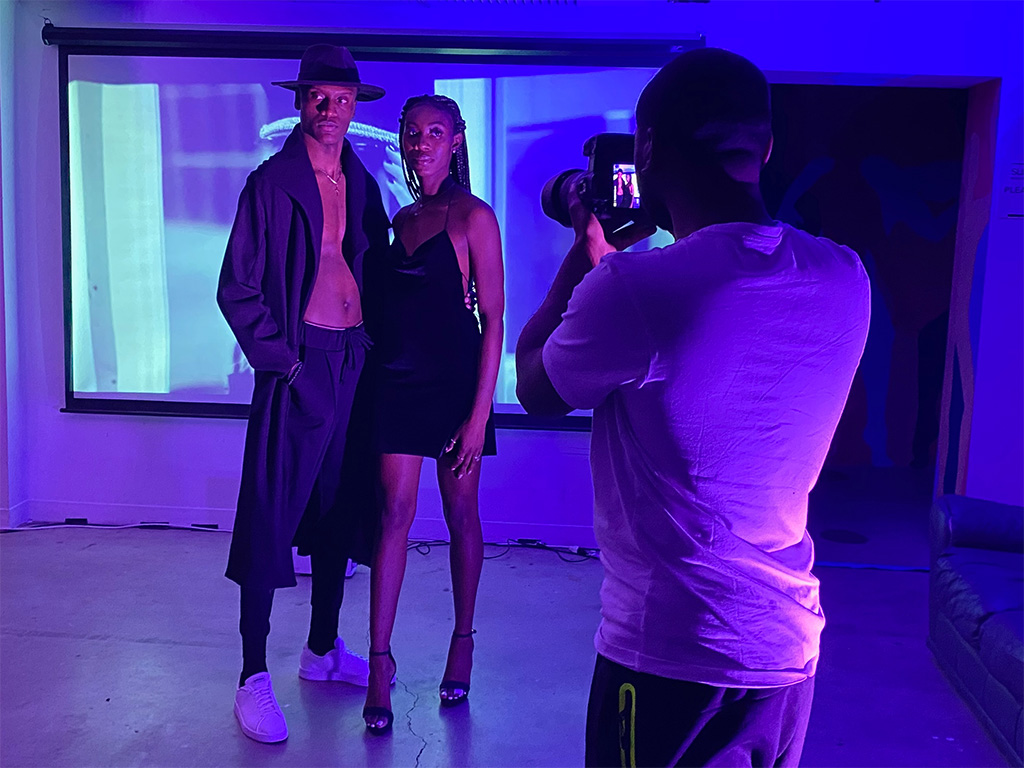 A Subcouture fashion event held in May at Subcentral in Central Square. (Photo: Marc Levy)

Experiments and partnerships save the arts

As Harvard packs up its Loeb and Oberon theaters for a move to Allston and a pandemic economy squeezes the arts in general, it’s good to look at how the creativity stays alive in Cambridge: improvisation, experimentation, partnerships and patronage. BioMed Realty has donated Kendall Square space to the Cambridge Community Center for the Arts for two years – and the CCCA in turn opened its doors to work with groups such as The Dance Complex – but now it’s the Multicultural Arts Center in East Cambridge that is growing a relationship with the organization while BioMed prepares the building that will host its 585 Arts nonprofit. The Foundry will open even sooner. Meanwhile, scientists paired up with poets and the theater, Lesley University artists filled businesses’ windows, and community art found a home in The Port at The Lucky Jungle, which has since evolved into 286broadway. Virtual performances were a new home for theater and jazz, while poets and experimental music moved outdoors, which was where the Honk! festival of street musicians and Vermont’s Bread & Puppet Theater are used to being. In the brief time coronavirus seemed almost solved, Club Passim put together a hybrid campfire. Festival in Harvard Square and Subcentral opened for DJ training in Central, delved into fashion and now plans member dance nights. The City Council worked to innovate as well, enacting a law that allows acoustic music performances in restaurants and other businesses without a permit. 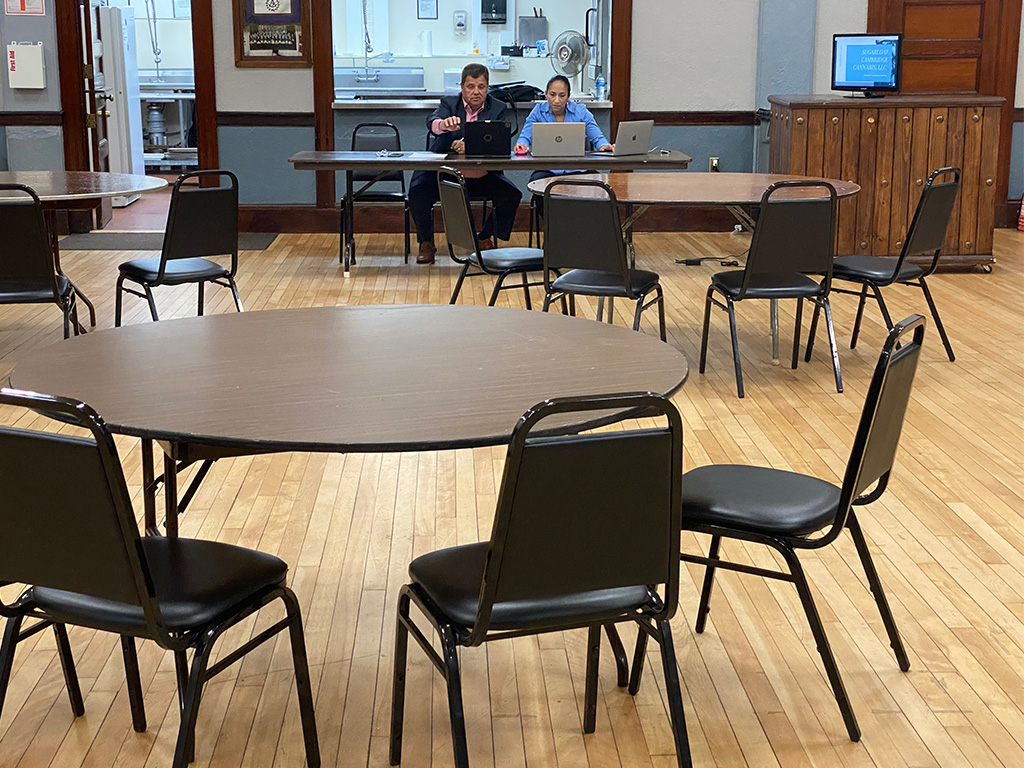 Time for the peace on drugs

The war on drugs is supposed to be over, and Cambridge’s plan for recreational cannabis shops was supposed to make up for some of it, granting a two-year head-start to pot entrepreneurs in the “economic empowerment” category – small-business owners who are people of color and thus most likely to have been disproportionately punished during that law enforcement war. A lawsuit by Revolutionary Clinics, the complexity of permitting and construction and the pandemic threatened to undo that head-start, but this year Rev Clinics dropped its suit and the city made a common-sense extension of the period by a year and is looking at offering financial help and a streamlined municipal process. The threat of cannabis businesses replacing existing ones, such as Stereo Jack’s Records, remains a bummer, but Sugarloaf owner Flávia Hungaro backed away from an option in The Port when she saw how the community valued the “286broadway” center she would have disrupted. In February, the council decriminalized entheogenic plants, which include such things as mushrooms, cacti and ayahuasca that can be used as psychedelic drugs, but also as treatment for medical conditions and addictions. Combined, it felt like a ramping down of the “reefer madness” approach to thinking about a product voters long ago said they wanted to use as they might wine or alcohol. (Still, no recreational cannabis shops have managed to open in Cambridge since November 2016, when 69 percent of city voters approved recreational marijuana as part of a statewide ballot question.)